Absurd Theatrics - then and now

Intrigued by the sound and movement of this piece, I found myself quite fascinated by this carousel of puppets.  On their physical appearance, the puppets reminded me of Oskar Schelmmer's dancers and costumes from his staging works for the Bauhaus Theatre, a mix of moving absurdity with precision in forms based on geometrically abstract visual compositions. The colors and designs on these tin puppets is reminiscent of the watercolor and pencil works by Paul Klee.  After standing for a few more minutes looking at the carousel of puppets going around, I noticed there are parts of raised long rectangular bars on the base which caused the feet of the puppets to lift then be dropped with this rather amusingly clumsy thump.  This intervention also causes some of the puppets to sway back and forth as they perpetually rotated around. 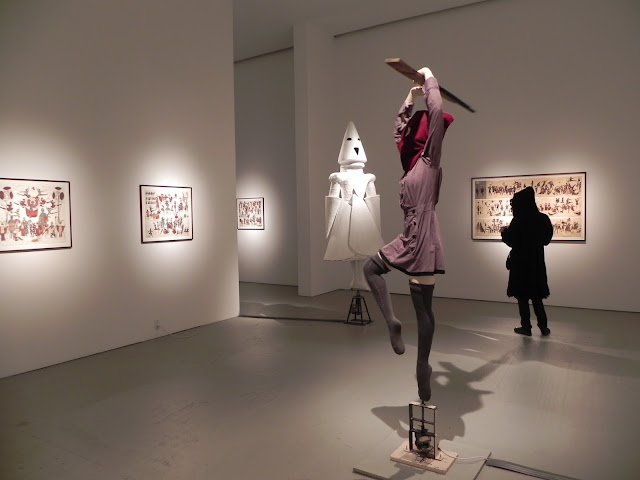 Seemingly predominated by rotating sculptures (in addition to the aforementioned there are two other pieces that are single rotating units of the characters from the film, what you hear in the background of the rotating puppets video is the film score.  The film's narrative is based on a chess game, aptly named as A Game of Chess), there are also meticulously stunning works of diorama as pictured below.  These diorama in some sense reminded me of shadow puppets, perhaps due to the lighting and the multiple cut-out characters in dynamic poses that overlap each other.  Diorama is usually seen in natural history museums in which scenes of historically significant battles are depicted and where pre-historical landscapes with wide lives re-constructed for educational purposes.  But here, in each of the cases is a dancing party taking place with juxtaposing murderous characters and determined heroins with pistols who are ready to break out into a bloody battle. Unlike Schlemmer whose main concerns in staging the theatrics focused mostly on the visual elements and the characters' ranges of motion through the exploration of gestural spacial dance, Dzama's staging of the theatrics falls more on the complex and morbid territories of human emotions.  Especially upon seeing the rotating mannequin endless twirling against the symphonic score of the film playing in side, there it carried a sense of foreboding.

These works by Marcel Dzama can be seen at Daivd Zwirner until March 19. 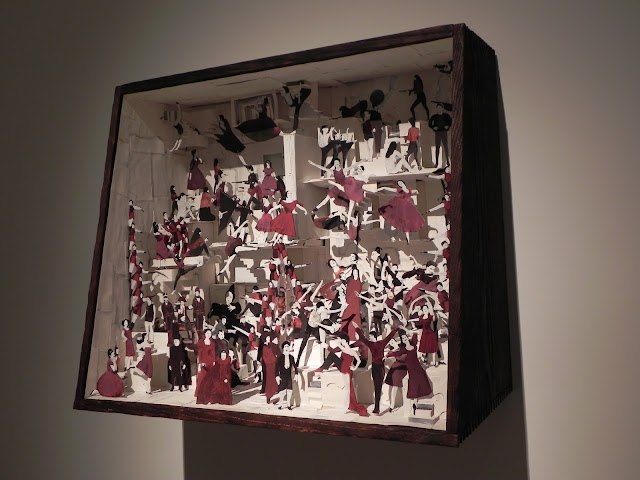 Now onto another kind of absurd theatrics, one that takes from a popular 1960s British TV series, The Avengers!  It is the most amusing and chic spy TV show that I have been addicted to Netflixing.  Although Steed was the lead character of show, especially during its first few seasons in the 1950s, however his English suaveness alone was not enough to  maintain its appeal to capture audience into the next decade.  Then onto the scene, Mrs. Peel swung into action in chic cat-suites and her intelligent detective moves. 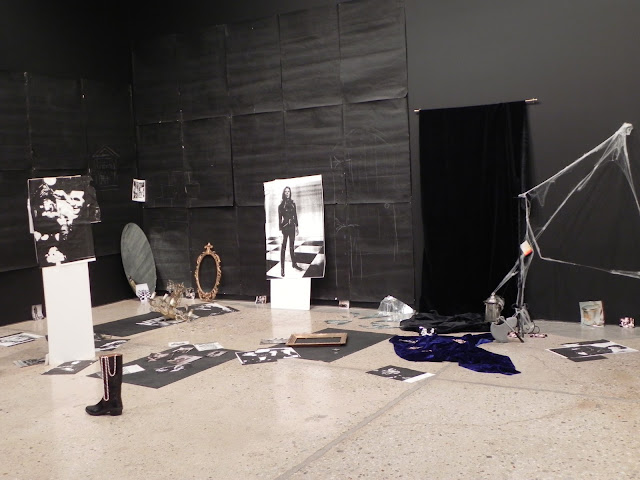 Artist Karen Kilimnik seemed to partial Mrs. Peel as well judging from the placement of this sleekly feminine leather boot draped with a strand of pearls in composition relating to the rest of the objects in this disheveled interior (or crime scene).  The degree of absurdity is heightened by the photographs of an actress who plays Mrs. Peel inside what appears to be the exact installation, while her poses appear very self-consciously contrived.  Perhaps it is a comment on the fact that during the later years, Mrs. Peels' tight outfit and her sexy appeal on the screen was more responsible for the survival of the show than the actual suspense in the 'crime stories'.  Meanwhile this installation seems also to be a play off on the obsession of the British invasion from those on the receiving end.   For those that are curious, this piece has a sound component which is a mixed soundtrack of The Avenger's theme song.  The soundtrack tided everything together and is perhaps the strongest element of the installation.  While conceptually this piece has a lot of charm and humor, however the crudely photo-copied images of the usual culprits of the British Invasion such as The Beatles did not seem entirely necessary to convey this already overly popularized social phenomenon.

These works by Karen Kilimnik are currently on exhibit along with her other paintings and photographs at 303 Gallery until April 23. 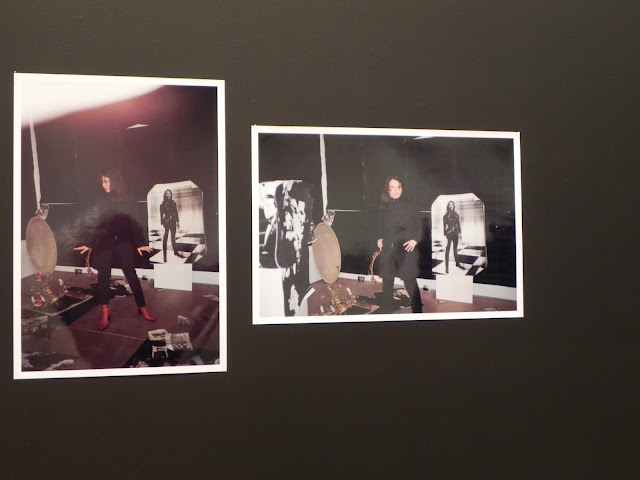