Art in General I

Two exhibitions opened this Friday at Art in General, Positions and Times Colliding.  Both were very interesting in their own ways and when compared together.  For part I of this post, I would like to share this work by Ioana Nemes called Times Colliding (Monthly Evaluations: 6.09.2006, 22.09.2007, 12.04.2011). My personal encounter with the artist Ioana Nemes during the reception was brief yet insightful. By the introduction of Curator Courtenay Finn, Nemes shook hands with me but seemed a little frazzled. Perhaps due to the exhaustion from finally having completed her work or perhaps due to the excitement of the opening night. In any case, when I saw a book in her hand I curiously asked if her sculpture had anything to do with Orlando this book by Virginia Woolf that she held in her hand. 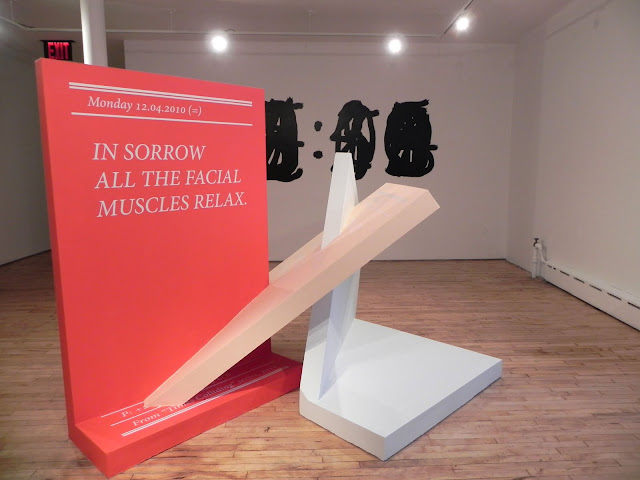 It turned out that the sculpture was not about Orlando or about Virginia Woolf specifically speaking, but more based on the way how Woolf described the perception of passage of time. In a paragraph from the book, Woolf described that the human perception of time was not so simply as linear as other beings. Unlike a vegetable or an animal that would grow and wither as time past on, passage of time in our human minds was like an intangible subjective phenomenon that expands and compresses and at times felt separate from objective reality. 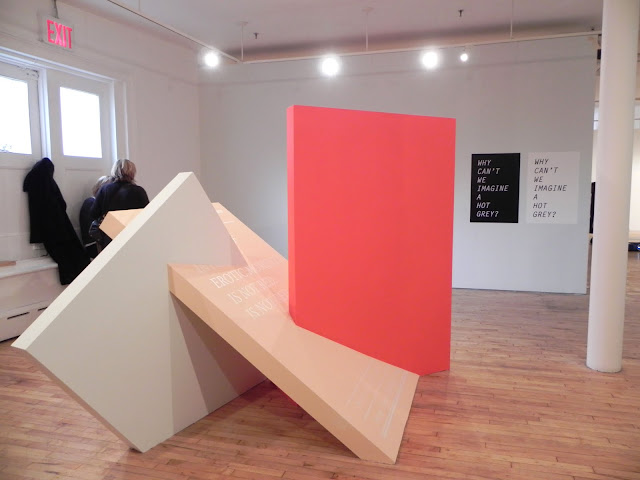 Time is a challenging idea to work in a sculpture since its form tends to be static. Time is immaterial and we cannot see or touch it. The only evidence that could prove its existence would be through records we make as time progresses. To coincide with this center piece, Nemes also made records of her daily activities ranging from her physical whereabouts to her psychological development through a course of time. Unfortunately, I could not provide images for this component of her show. However for the images I have of her sculpture, the very idea of non-linear and subjective sense of time passing was established rather poetically. Incorporating architectural forms, Nemes constructed these variously colored wooden panels that interposed each other to visually and physically convey how events and feelings could take place and shape simultaneously in time and space yet still be separate from each other.

Personally, I also liked the piece for its aesthetic value. It reminded me of this work by Lyubov Sergeyevna Popova called Painterly Architectonic made in 1917. Even though, for Popova she was more interested in the experimentation of pure geometry and composition in painting. As some would say that she served as a catalyst of Malevich's Suprematism. On the other hand, Nemes was able to strategically juxtapose the geometric forms in three-dimensionality while at the same time went beyond by metaphorically and architecturally provoking the viewers to re-examine the idea of time and space.