Here is to gibberish!  Gary Hill has always in astoundingly intriguing ways for translating gibberish into something sounding intelligent and mind-boggling.  In his latest exhibition at Galdstone titled "of surf, death, tropes & tableaux: The Psychedelic Gedankenexperiment", the video gave me the feeling that he was as if speaking in gibberish; in this video using the phonetic element of spoken language to shift back and forth in the nonsensical absurdity in order to conduct thought-experiment based on a scientific rationale.  While presenting the scientific hypothesis of human language and its relation to visual perception, Gary Hill behaved like a mad science teacher lecturing in a what seemed to be a molecular structure or what could have been a model used to demonstrate chemical compound.  The fun part was having to put on a pair of 3-D glasses (provided by the gallery) and watch the video as of it was a psychedelic flic. 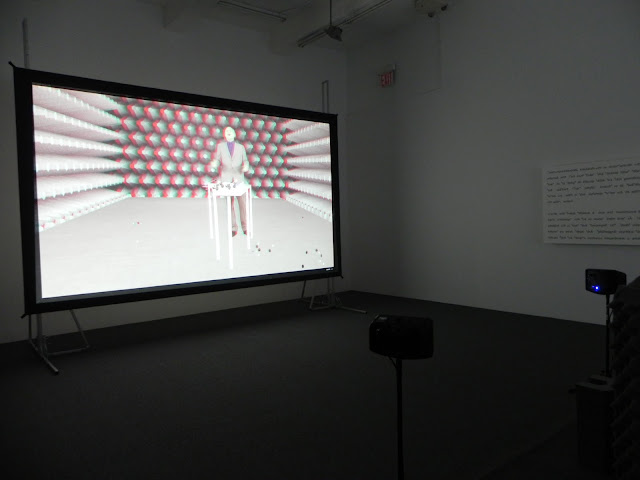 What I got from the exhibition was the play between what was actually presented as opposed to what was personally interpreted by the receiver or spectator.  In other words, the meaning of words were separate from the things they signified.  If we understoodd the words by identifying it with certain images or associate it with things we experienced, that was only because we have conventionally grown accustomed to the way certain meanings have been attributed to words and objects in our lives.  In this flickr (film) video installation piece, Hill projected MRI images of the human brain on the walls along with a DNA-looking structure suspending from the ceiling of the room.  In the background Hill's omniscient voice flashed in and out like the strobe lighting that comes on and off with timed intervals in between to throw you off of your awareness of the physical space.  In order to enjoy this piece, you would need to actually be in that space however I have included a video just for those who might be curious now.

Lastly, I also noticed that parts of the gallery floor has been screen-printed with distorted images of objects such as a wooden chair and a bicycle.  Here I tried to take a picture of the chair in a way that it liked as if it was standing on its legs, however the image perhaps might give you just about half of that impression; while from the other angle was that you could see the image as only a flat image printed on the floor in order to fool the eye.  This exhibition is up until April 23 at Gladstone Gallery. 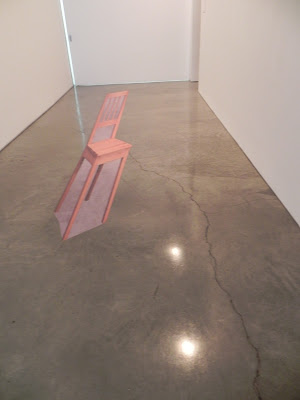