April 29, 2011
Language based Conceptual art has always puzzled me, so I was pleasantly intrigued to contemplate Joseph Kosuth’s “Nothing Paintings “at the Sean Kelly Gallery. Selected from his well know series 'Titled (Art as Idea as Idea)’ these works present the idea of “Nothing” in paradoxically tangible form.  Here, the word nothing is presented in a series of square-format wall-text pieces on which definitions of the word “nothing” appear in white text on black ground. Each articulates various dictionary definitions ranging from one sentence to the more extended meanings and literary usages of the word. 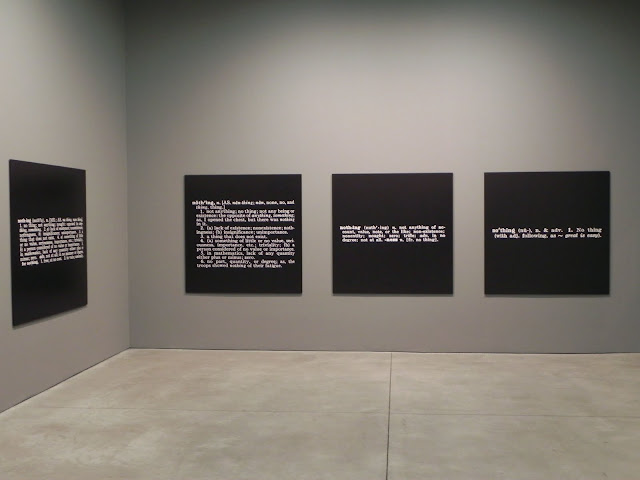 As I see it, however minimal, Kosuth does not fail to neglect visual concerns altogether. There is a controlling minimal aesthetic throughout. Painterly concerns are evident in their uniformity of installation, composition, and color. All text is systematically centered on a void ground and the group coalesces into a total unit. Their austere surfaces and equidistant spacing call to mind the serial works of Donald Judd.  This anonymous format seeks to question the assumption of the artist as the special creator of a special kind of object. In Conceptual art the artist becomes nothing. A central motive here is to undermine or deny the supposed originality of the artist and the work they produce.  Ironically these works come with a certificate of authenticity (not to be exhibited) which thereby advertises each, not merely as a unique objet d’art, but a genuine Kosuth.  While it is pleasantly absurd to ponder purchasing “Nothing", but the question that remains is whether one is purchasing the object or the idea? 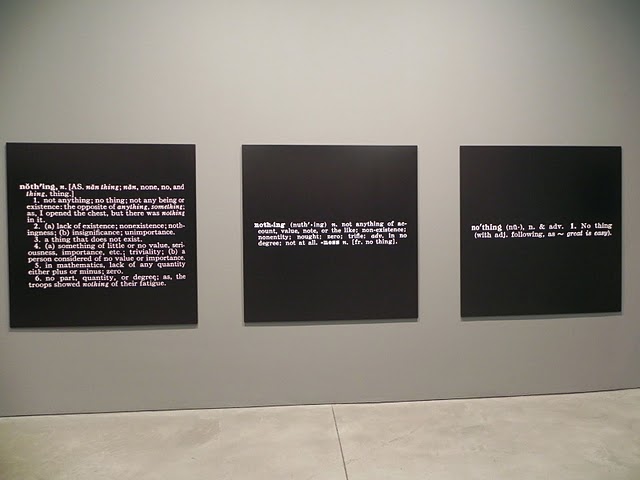 Another text work is inspired by James Joyce's Ulysses. Here the names of his eighteen characters which form the titles of the book’s chapters are festooned in neon across the gallery wall. Time stamps appended to each title reify the novel’s non-linear narrative time in concrete form.  Lastly, I highly recommend a new installation by Kosuth which runs along the perimeter of the main space.  The work’s title is a play on Beckett’s most famous work, and is called 'Texts (Waiting for-) For Nothing'.  I apologize for having waited this long to publish the post that should have been done so much earlier, because this show ends on April 30. 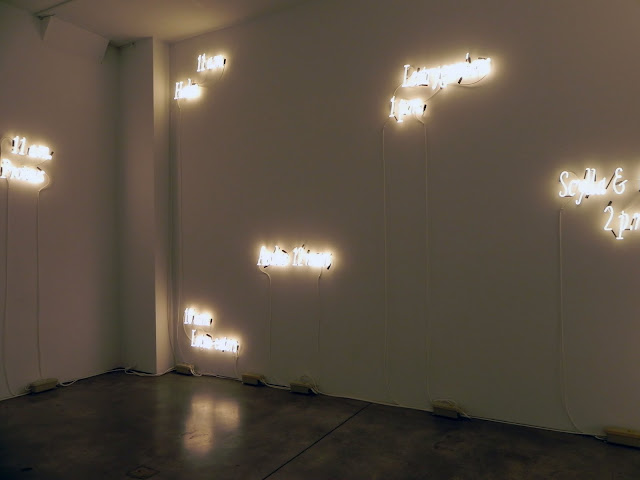 Opening on October 28 at the WhitneyDreamlands: Immersive Cinema and Art, 1905-2016 is an exhibition that chronicles visual and sensory explorations of the cinematic space through use of technology.

This exhibition is chronologically organized into three parts.  On entering the fifth floor gallery, the exhibition starts with a large video projection of Oskar Schlemmer's Das Triadische Ballett (1922 /1970).  It is a 35mm film transfer of the Schlemmer's ballet with color and a music score produced by Bavaria Atelier for the Südfunk in collaboration with Inter Nations and RTB (Belgian Television).  The ballet is whimsical and the vivd colors gave the production a contemporary feel.  On a chess board like floor the dancers bounce about like machined puppets moving to the rhythm of an abstract sound score.  The mesmerizing narrative is a love story between machine and man.  To the side, visitor can enjoy the original dance of archival footage by Oskar Schelmmer produced in 1926.

Excerpt from "History in the Present Tense," an essay I wrote for the magazine, something we Africans got.  All feedbacks and comments are welcome.  As we are still in the editing phase.
Barbara Chase-Riboud has been a prolific artist, novelist, and poet for five decades. Her well-researched narrative history novels emphasize forgotten people and events of cultural significant that change the way we understand our past. As a poet, Chase-Riboud is eloquent and spontaneous.  Simultaneously, her poems like her drawings inform her artistic practice as a sculptor. Focusing on form and material, her process as a sculptor is altogether different from writing. To Chase-Riboud, writing is a kind of accumulation of information, and the narrative unravels on a linear time line, but making a sculpture is to present all the information at once.

Chase-Riboud is an American who chooses to live abroad in Europe. Born in Philadelphia in 1939, she moved to Paris in around 1961. The artist once…
Read more

Sunset has the color of nostalgia, its red orange haze has always enticed me to the most sentimental yearnings. Naturally it is easy to see why I like these works, though it mimics the sunset but its artificially produced hues and patterns also evoke a different kind of yearning than the every-day sunset.


Inspired by natural light occurrences and images of nature the artificially produced elements of the piece add a cinematic effective that overly dramatize the sense of nostalgia.What I love is the light projection through the perforated screen sculptures making beautiful patterns all over the floors and the walls. These patterns also remind me of movie scenes from Casablanca (1942) and others in which the interior shots of somewhere faraway and exotic drives the mood of romance and longing. Here you can see the set-up of the lighting that consists of a pair of cinematic lights behind a screen.


Sue de Beer is one of my favorite artists, through manipulations of light and colors her …
Read more