Skip to main content
Posted by Chennie Huang Wednesday, May 18, 2011

The much anticipated Under Destruction exhibition finally opened again last night with its sequential chapter II at Swiss Institute.  Unlike the previous chapter, this one is more explosive and destructive in the sense that things do get destroyed during the process.  Whereas during the previous exhibition, the sense of re-creation and transformation into something new after the initial destruction is more evident. On the other hand, what is similar about this exhibition compare to the last is that there is still a good number of time-based pieces, and those to me are the ones that really dominate the whole exhibition. 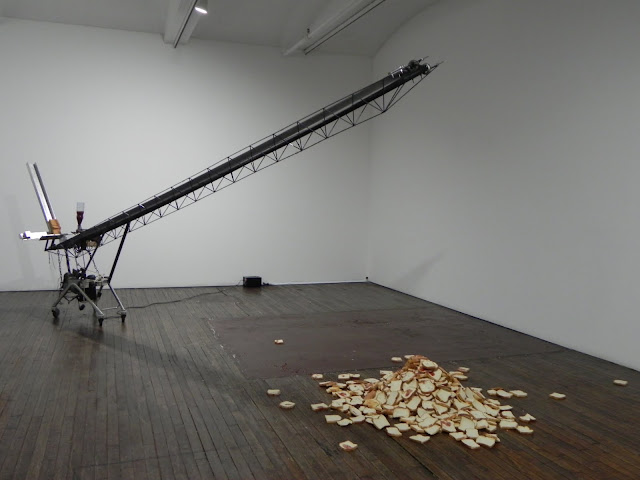 The piece that is most amusing to watch is this one by Johannes Vogl, a homemade contraption named Untitled (Machine To Produce Jam Breads, 2007). What this long-necked mechanism and to me what also looks like a tower crane that one would see on a construction site does is nothing intimidatingly destructive, it simply transports a loaf of sliced white bread which is place at one end of the machine to the other end which sits a pot of jam (strawberry flavored, perhaps?) then as the slices of bread goes up via the conveyor belt system a knife gingerly spreads even the jam. However, the fate of these jammed slices of bread is not into anyone's mouth as it usually would end up as some kind of nourishment to satisfy human hunger, instead the slices of bread end up gets dropped onto the floor and becomes a pile of inanimate objects. If in the context of the art gallery, one can say that the process is producing humorously some kind of delicious American white-bread fare aesthetic but to plainly admit they just end up as waste. In the SI write-up, it mentions that the piece addresses the question of overproduction. To me, this piece also showcase the absurdity of our daily functioning, it being a monotonous process of production, consumption and eventually all ends up as a pile of nothingness. 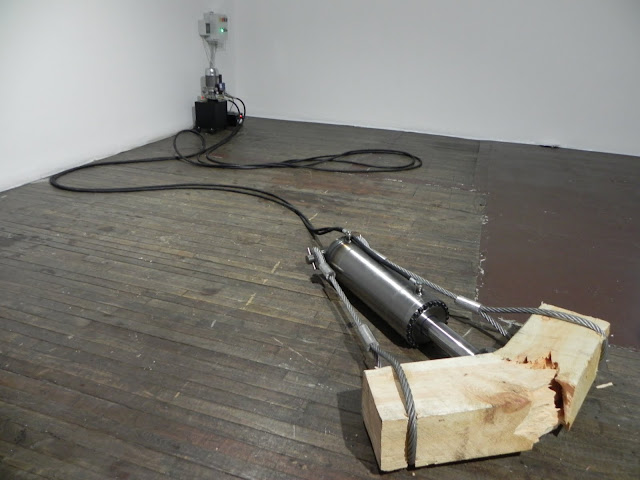 The other piece that caught my eye is this one also named Untitled produced in the same year as the last one in 2007 by Arcangelo Sassolino. This piece of machinery looks a bit more engineered and sophisticated to me than the last one, nonetheless they each serve their own concepts and purpose amicably well. From what I read, this is a hydraulic arm that slowly and gradually destroys a large block of solid wood. Unfortunately, on the night of the opening this piece was not in its usual operational state, however by observing its physical make-up I could imagine the power of this massive machinery. Again, there is this undeniable absurdity in creating such a complex contraption for the purpose of destroying pieces of wood, at the same time it points to us the absurdity in life that many things are created and built without any specific purpose or meaning but only for indulging our need of sheer visual pleasure, visceral gratification or to achieve some commercial and economic means. 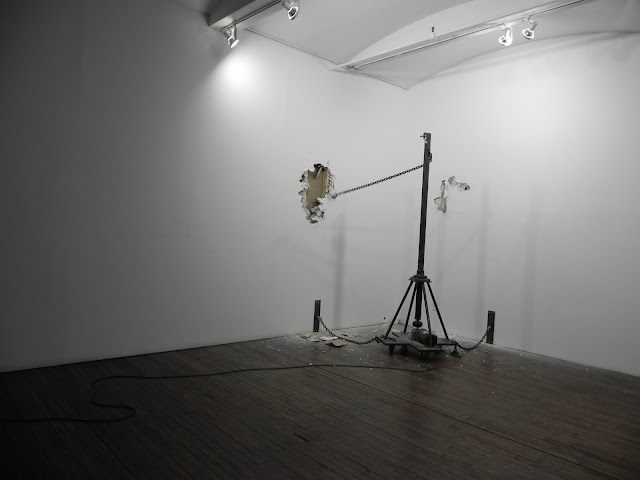 Lastly, this piece screams destruction, destruction by its sound, movements and what it actually does. Also, this is the only piece that welcomes the audience to touch (or flip the switch) in order to perform destruction. The destruction that it performs is automatically knocking a giant hole in the wall of SI gallery from the look of it. Unlike the other two pieces I mentioned this one actually has an apt title called Corner Basher made by artist Liz Larner in 1988. It is a drive shaft mechanism that swings a metal ball on a chain into the corner of the wall, each time when the machine is activated the metal ball violently hits the wall with a loud bang while at the same time chips away a good chunk of the white wall, thus exposing the inner architecture of the dry wall. This is as much fun to watch as the previous two, and there is something liberating about the actions destruction for the sake of destruction. I enjoy the loud noise it makes, the heavy and clumsy movements of the metal ball and chain as it swings to take apart the interior architecture of the gallery. There is nothing like a little bit of angry violence and destruction that could cure a broken heart or whatever else you might be feeling unhappy about. I highly recommend this show. Please go to SI before June 19 to catch Under Destruction, Chapter II. 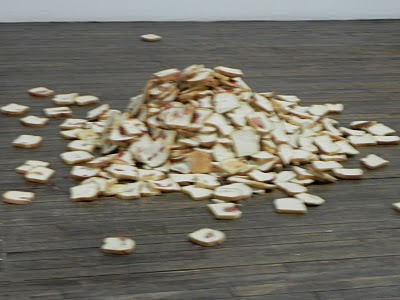