June 19, 2011
Rather than attempting to come up with a more cleverly descriptive or metaphorical title to name this post, I have decided to titled it with just her name, Louise Bourgeois. To me, Louise Bourgeois' works can never just be categorized simply as works that deal with motherhood, femininity, domesticity and sexuality. Even though all of these elements exist conceptually and often times physically in her enormous body of work (which expands from sculptures to installations, drawings and paintings in mediums from oil, water-color, pastel, charcoals, Gouache, ink, wood, bronze, marble, metals, fabrics and perhaps even more), however more importantly, it is the conveyance of the oppositional emotions and the psychological battling aspects that entices me the most of all. She is one of my favorite artists because when I look at her work I almost always find some kind of emotional comfort and psychological reaffirmation for my own inability at times to cope and adjust between conflicting emotions. On this weekend, I found myself utterly swept away by her fabric works at Cheim & Read. 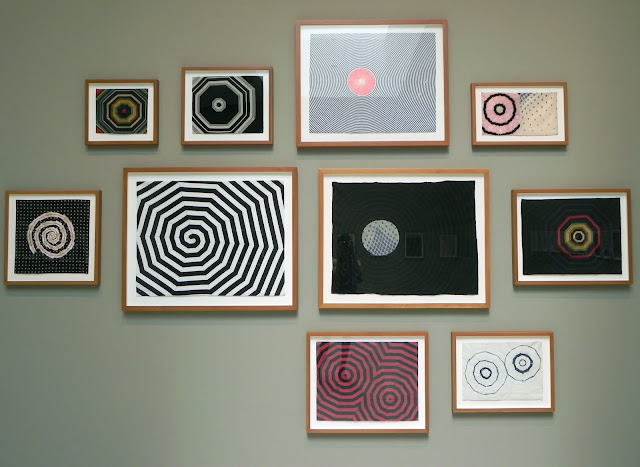 Born in Paris in 1911, Bourgeois moved to New York in 1938 and lived in the city until her death at the age of 98. While her parents were in the business of repairing and restoring tapestries, Bourgeois grew up surrounded by fabric and textiles. As a young girl, her parents often called on her to work as a draftsman drawing in the missing sections of tapestries to be restored. As the result of her early exposure to working with fabric, since the 60s Bourgeois began incorporating soft materials such as latex, rubber, terry clothes, nylon and other varieties of fabrics in her work up until in the later years of her life. While I find her fabric sculptures of heads and headless torsos of love-making couples eerie and often times evocative of morbid moods, these pairings of different textures and colors fall harmoniously in place with one and the other. Here I also see more clean forms of geometrical webs, spirals that pertain very much to the modernist aesthetics of grid-making. 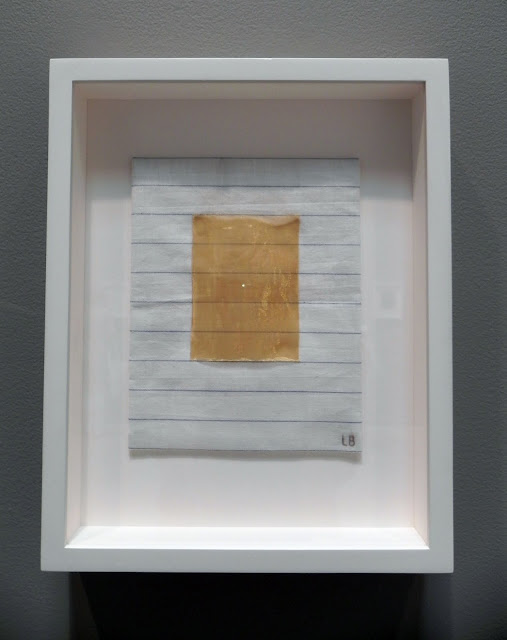 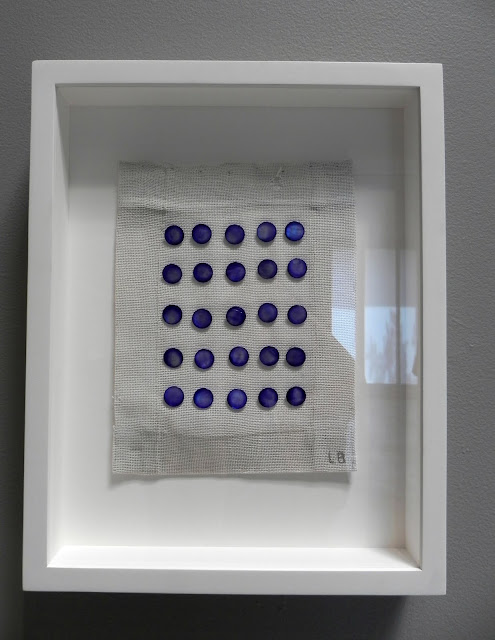 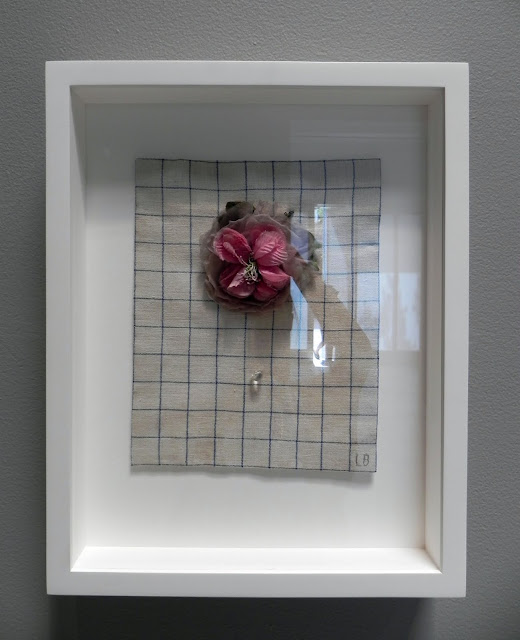 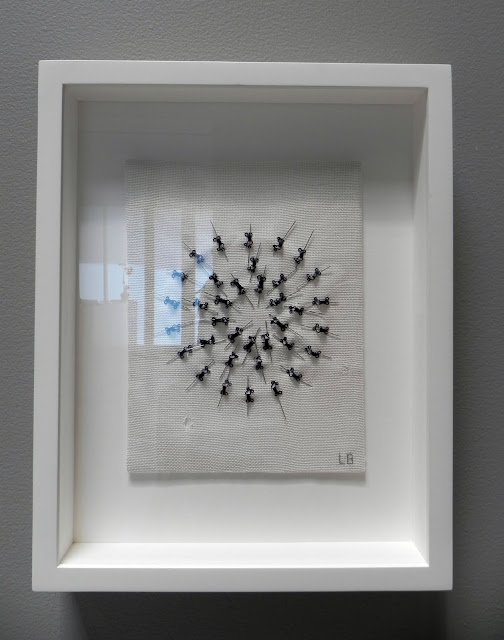 In most of her adult life, Bourgeois had experienced perpetual insomnia but from her anxieties and neuroses it was peace and calm that she desired. 'The polarity I experience', she explained, 'is a drive toward extreme violence and revolt ... and a retiring. I wouldn't say passivity ... but a need for peace, a complete peach with the self, with others, and with the environment.' One of the ways to help her attain this peace and calm was by repetition, such as the the repetitive motion of a line that forms the various grids that are often present in her works. 'The grid' as Bourgeois said, 'is a very peaceful thing, because nothing can go wrong ... everything is complete. There is no room for anxiety ... everything has a place. Everything thing is welcome.'

These four pieces are actually a part of a sixteen-piece series called Eugénie Grandet 2009. The name is borrowed from a novel written by Honoré de Balzac. While, I am actually not too familiar with this story but only its general plot, I appreciate these works by their formal elements that transpire my emotional response. The emotional response especially to this last piece is the innate violence that these seemingly harmless domestic elements can actually convey. I can feel a sense of danger or violence that comes through the physical positioning and juxtapositions of these apparently ordinary garment-sewing utilities. At the same time, when the hood-and-eye closures are pierced through by the cloth-pins, they form these symbols of inevitable bodily harm. I also like the polarity of the prettiness of the flowers and fake crystals against the rigid grid that looks to be more stern and disciplined than the elements placed on its surface. 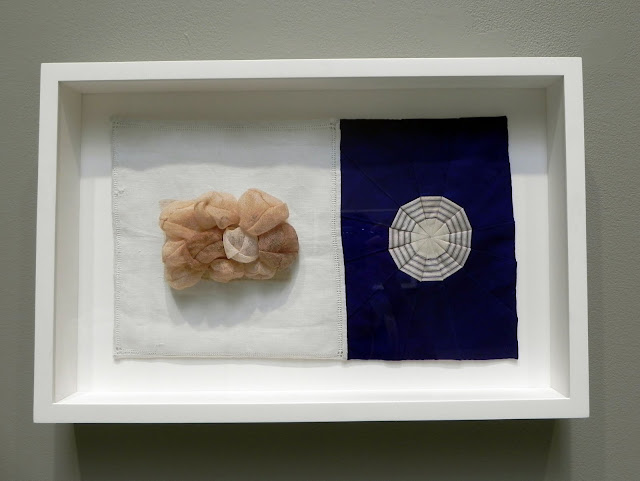 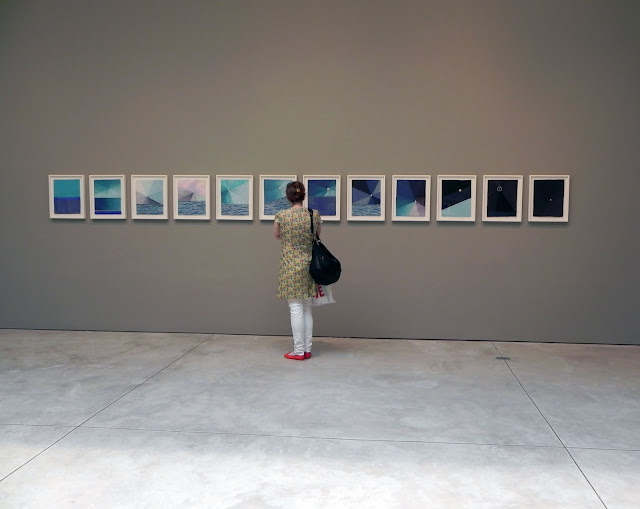 It is difficult for me to think of a better way to end this post, because I feel like taking you through every piece and sharing with you all these wonderful quotes I found in books about her. However, I must end this somehow and I think it apt to end it on these of my favorite pieces from the show. I like them for many different reasons, but one of the main reasons is that they all contain this color blue which has been my favorite color of all time for years. Pleasantly surprised, blue was also Bourgeois' favorite color.  She had once said about the color blue that it 'represents peace, meditation, and escape.' In a text she wrote in 1947, shortly after arriving in America, she wrote: ' Can you remember the Paris sky? How unreliable, most of the time grey, often warm and damp, never quite perfect, indulging in clouds and shades; rain, breezes and sun sometimes managing to appear together. But the New York sky is blue, utterly blue. The light is white, a glorying white and the air is strong and healthy too. There is no foolishness about that sky. It is a beautiful thing. It is pure.' Even though I cannot say the New York sky is as pure these days or that the air is strong and healthy persistently as it once were, however I can say this much is still quite true, is that in order to feel calm and peace with oneself, and with her environment and surroundings one must learn to retain a poetic view of all things in life and even though nothing may ever remain the same but one's heart should remain true to the love of all things despite occasional disappointments. Please go to Cheim & Read by June 25 to catch this exhibition.