June 21, 2011
With my long-standing fascination of all things nautical, from sailor knots to tirelessly trying to scavenger interesting looking old wooden sailboat models at tag sales and junk stores of mid-America, this exhibition I saw at Winkleman Gallery had just the stuff that tickled my heart. 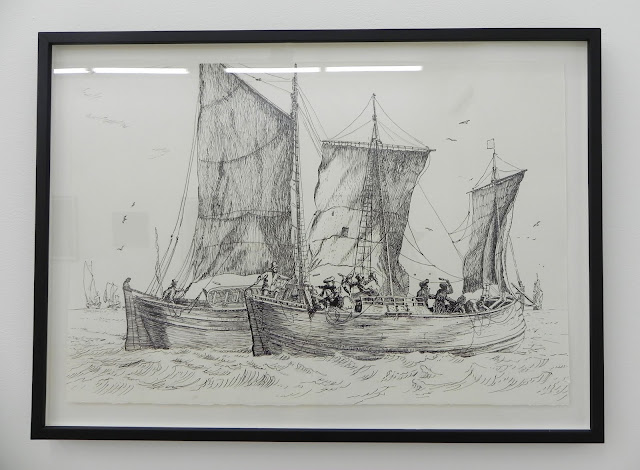 This exhibition presents the Chadwick's nautical collection. In the early nineteenth century, the Chadwicks began collecting these records and memorabilia commemorating those ships that were lost at sea in midst of storms and other unfortunate sea disasters. The exhibition features various forms of shipwreck in visual records and scene depictions of ships lost a sea. To name a few, there is a life-size replica of a capsized boat that took down its owner after struggling unsuccessfully against the violent rage of mother nature. The model of that boat had later been used as a bar and thus humorously named as Man o'bar by the Chadwick family descendants. While looking at the piece and reading about this, I had some mixed feelings on whether I should take the position of a mourner or the position of these aristocrat musing themselves on other's personal tragedy because they had the means to rebuild this curiosity. On the other hand, the humor exerted on these records of shipwreck helped me to appreciate some of the piece beyond the practicality of which there were initially made for. Out of many other prints, drawings, sculptures I pick these three somewhat visually identical (only from afar) but records of different shipwreck scenarios to talk about for the narratives they visually present as well as the ambiguous meanings they held for the owners and the people who commissioned for them to be made.

Although one way of looking at these shipwreck records is to position them as Chadwick's attempt to preserve the documentation of folk culture, in other words these paper relief pieces in some ways serve as evidence of what took place in historical times that could have been otherwise forgotten and lost in the more modern era. However, there is an oppositional view that I learned from reading this blog. In the early nineteenth century when these tragedies at sea took place, the Chadwick family had massive stakes in most of the British and European shipping lines and therefore these memorials served at the time as records of technical information about the shipwrecks that might be used in legal cases.

After reading about this, in fact, I feel more intrigued because apart from their antiquated aesthetic value, there is actual history and scandals around the works. Here I have labeled each of the images of the memorials with the their engravings on the bottoms in case most of you are not able to make out what it actually says. These short descriptions of what took the ships down all mark very specific times in history with almost first-hand accounts of what happened during those fateful dark nights. On the piece memorializing the Diligence, there it says in a fragmented sentence: " ...tackles hauled out, and were just mounting the forerigging when the storm..." To me, this last unfinished sentence is very much like the works and records themselves is that we may never know the details of what actually took place. To add another layer of my own interpretation, this is also like the open-ended debate of Chadwick's true intention for preserving these records, was it for honor and moral concerns or was merely an attempt to preserve the family's own legacy and wealth? This exhibition is currently up at Winkleman Gallery until July 29.