Home as the antithesis of comfort, familiarity, and security

July 26, 2011
Currently on view until August 5 at David Zwirner is an impressive group show called The House Without The Door (the title is taken from a poem written by Emily Dickinson, see end of this post for her poem), it is a show that contradicts the conventional notion of what a home to most people's imagination would feel like. It eradicates all the romantic and warm memories of love, comfort, trust, and security. Since I have been personally and emotionally shattered also intrigued by the presentation of realities in life that often times contradict and eradicate my own romantic notions of love, comfort, trust, and security, upon seeing this exhibition my own emotions were assuaged in more ways than I expected. Please note this is a large group show consists of many more artists than the ones I have chosen to write about. The exhibition includes other works by artists such as Louise Bourgeois, Francis Alÿs, Gregor Schneider, Thomas Ruff, Robert Gober just to name a few that come to my mind.

To start off, here is a work by Mona Hatoum called Home (1999). Hatoum was born in Beirut to Palestinian parents exiled from their homeland. In 1975 during a visit to London, when a war had broken out in Lebanon that prevented her from returning to Beirut she remained in the UK for most of her life. Inevitably through her works, the peripatetic nature of her past and the ambivalent notion of home are reflected. In this piece, aptly named Home in fact translates more anxiety than comfort to the viewers. Home consists of a long table covered with gleaming metal kitchen appliances. The table has a polished wooden top with heavy metal legs on wheels. While the flat top of the table reminds me of an operation table and with the heavy metal legs on wheels, it also reminds me of the wheeled bed used to transport corpse to the morgue if the operation had failed. The kitchen appliances include graters, scissors, a colander, a whisk, a ladle, salad servers, a sieve, a pasta maker, presses and a heart-shaped pastry cutter. In the video (this refers to the video I attached to the blog-posting), you can see wires snake through the installation and connecting each utensil with flowing electricity that lights up the units one after the other as the current travels through. As viewers, we are being kept back by the horizontally stretched wires and thus it conveys this feeling of foreboding danger upon any close contact to the objects. What adds to this notion of danger is the sound component, there are speakers amplifying the crackling sound of electricity coursing through the wires and to the metal objects. From an interview by Jo Glencross, Hatoum had said: " I called it Home because I see it as a work that shatters notions of wholesomeness of the home environment, the household, and the domain where the feminine resides. Having always had an ambiguous relationship with notions of home, family, and the nurturing that is expected out of this situation, I often like to introduce a physical or psychological disturbance to contradict these expectations." 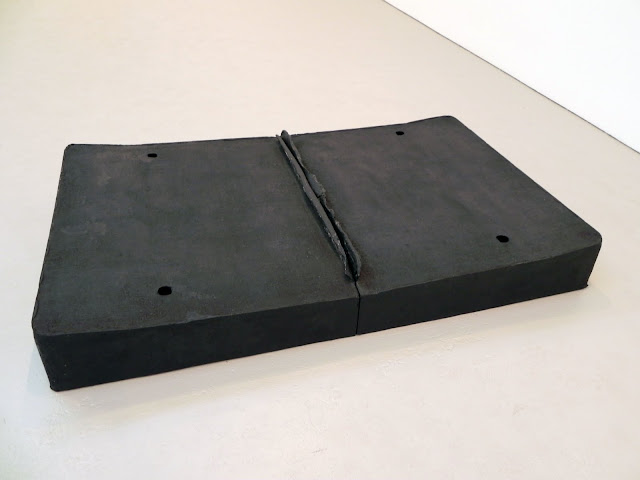 In this piece called Untitled (Black Bed) (1991) by Rachel Whiteread, there is this tension between form and narrative that I find quite fascinating. While in his essay, "Art and Objecthood," published in 1967, Michael Fried said this about art that relied solely on its materiality and form:

It is this continuous and entire presentness, amounting, as it were, to
the perpetual creation of itself, that one experiences as a kind of
instaneousness [author’s italics], as though if only one were infinitely
more acute, a single infinitely brief instant would be long enough to
see everything, to experience the work in all its depth and fullness, to
be forever convinced by it.

I would like to add to his instaneousness theory by saying that in Whiteread's case, beyond the physical the narrative of the piece counts just as much as its formal aesthetics. In other words, a single infinitely brief instant would not be enough to see everything.  In order to appreciate the work, the viewers encounter in the formal aspect of the work, as it is immediately accessible and most present.  In addition, the narrative aspect of which perhaps is not immediately accessible inevitably presents as much importance as its formal physical appearance. For the reason that this physical form came out of the artist’s psychological narrative, the one of which requires more than just a single infinitely brief instant to see and understand.
For this piece, Whiteread used the space underneath one of those folding mattress beds and made cast in two sections. Then she (as read from an interview) didn't make anything for the space in the middle of the two sections but just bunged the black rubber down and it came out in this funny and strange lip shape. Also from an interview, she admitted that it was an ugly looking thing when also her friend had pointed out that the shape reminded her of some kind of dirty stuff that one might find under her fingernails. To relate this piece back to Hatoum's piece through which this critique of the conventional nature of femininity is expressed very differently, since Whiteread presents a raw femininity that is more sexual than domestic. In some ways, it being a black bed also seems to suggest a kind of morbidity and death. The only aspect that signifies home is its physicality that appears as a mattress bed, something that is normally seen and used in one's home. Furthermore, this bed also seems to signify the emptiness of a home as the cast is made from a negative space rather than a direct casting of the mattress. 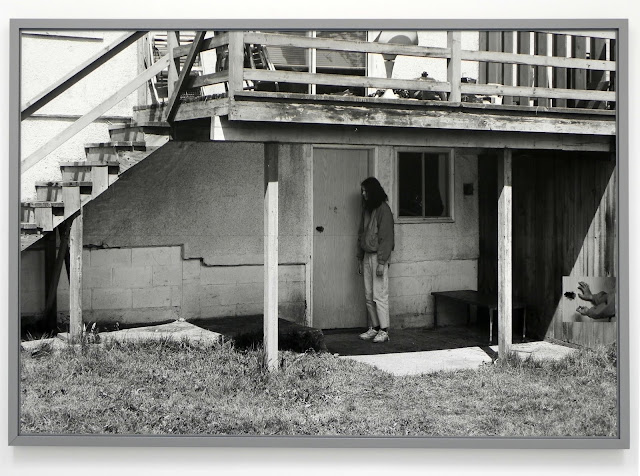 In this piece by Jeff Wall called Rear, 304 E. 24th Ave., May 20, 1997 depicts a disheveled young woman standing out in front of a dilapidated house. The strong contrast in the lighting combined with the chaotic vertical and horizontal lines formed by the crudely constructed house invoke a grave sense of stagnation and rejection. According to the David Zwirner press release, the small photo inserted on the right lower side of the photograph indicates the close-up of a hole in the back door. Through the backdoor and through that hole money is exchanged for dope. The estranged young woman is depicted as the addict who is lost but looking for a home or a place in which she could reside and find comfort. The desperation of this addicted young woman conveys a deep sense of sadness and triggers a great deal of compassion. Maybe in her mind, despite the far distance she had traveled to get to this home, and for no matter how transient and hallucinatory her home might be, she continues to stand there until she is accepted. Here the notion of home is presented both as one's imaginary safe refuge as well as one's ultimate enemy for life. 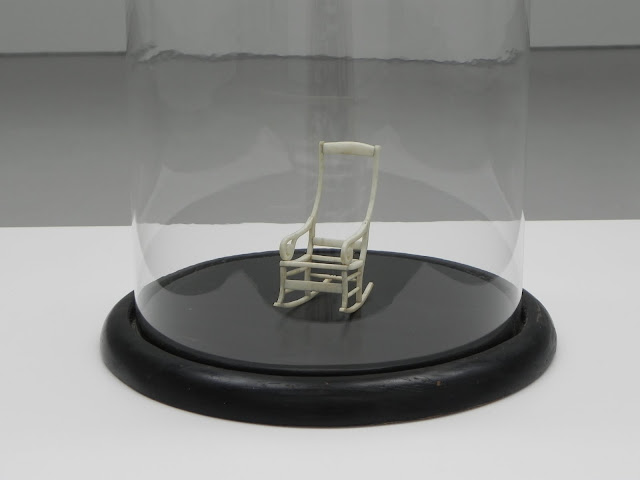 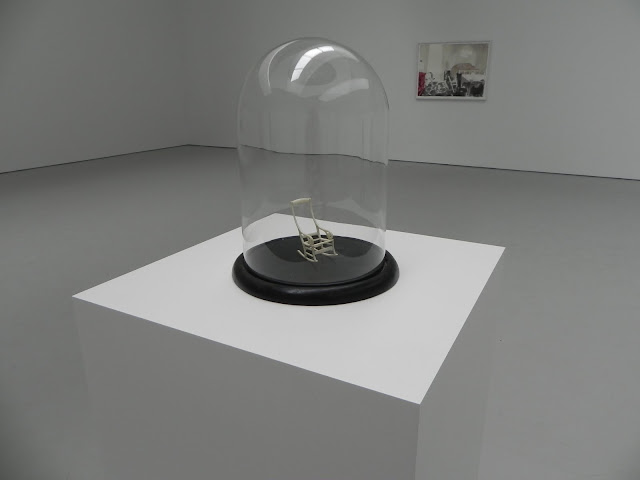 By Charles LeDray, this piece is made with real human bone, glass, and wood. It is called Bone Chair. This piece sums up this post for The House Without The Door at David Zwirner. Physically and conceptually, this piece depicts the same degree of morbidity, confinement, and the imaginary safety in the notion of home as described in the Emily Dickinson's poem with the same title as this show:

Doom is the House without the Door —
‘Tis entered from the Sun —
And then the Ladder’s thrown away,
Because Escape — is done —
‘Tis varied by the Dream
Of what they do outside —
Where Squirrels play — and Berries die —
And Hemlocks — bow — to God —