July 12, 2011
We are finally at the last phase of this three-chapter exhibition at SI, Under Destruction III ends with a mood of light melancholy through poetic transformation. While the first chapter opened with the bold determination of giving rise to something new by unrelentingly destroying and disrupting the physical state of objects. Then, followed by the second chapter of reckless acts of smashing, breaking and finally until the physical object is completely destroyed through the process of destruction. Now, arriving at its final phase, I am faced with the poetry of the spontaneous but unnatural (as in enabled by the maker) metamorphose of while letting go one original form, then through the seemingly destructive gestures that actually reveal meditative qualities. Personally, I tend to like works that in one way or another reflect my own state of being sometimes emotionally or psychologically. In other words, what I realized from this last exhibition is that to finally be able to let go of something does not mean all is lost but with patience and time a different kind of insight soon reveals itself just as beautifully as what had been once familiar and close to the heart.

In this first time-based work by Alexander Gutke's The White Light of the Voice (2002), it shows a piece of celluloid as if stuck in the projector is slowly being melt away until it physically disintegrates into thin air. Coming from a filmmaking background, I hold a natural affinity to any works done with 16MM film. Especially in this piece, when the materiality of film has been subjected to dematerialize itself through the very thing that gives it life, the projector. There is something quite beautiful about the physical relationship between the light bulb (and the film) that is inside of the projector and how the light is in one sense the essential element of producing and translating the visual effect of the film that we see, however it is at the same time the lethal element that destroys the original image. The poetry lies in the resilience of that piece of celluloid, while its physical element is being melt down but its process is one that carries a delicate grace and completely mesmerizes its viewers.

This is perhaps the less melancholy and more aggressive piece of the show. Despite of its clumsiness, this seemingly crudely constructed contraption playfully sparks violent flames with bubbles that remind me of times being a child while blowing out bubbles onto the streets with my little bottle of home-made washing detergent bubble maker. The dichotomy in taking cues from such warm and fuzzy child-like act of blowing bubbles then contrasting with the sudden violent eruptions of heated flames once the bubble comes in contact with the electrified field of coils really intrigues me. This piece is called Untitled (Bubble Machine) (2006) by Ariel Schlesinger. 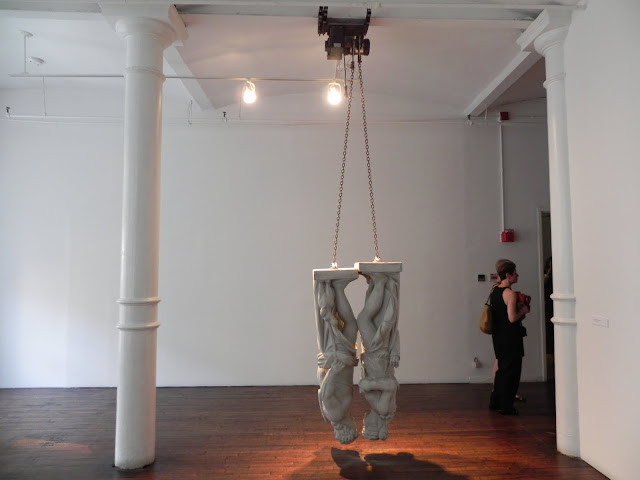 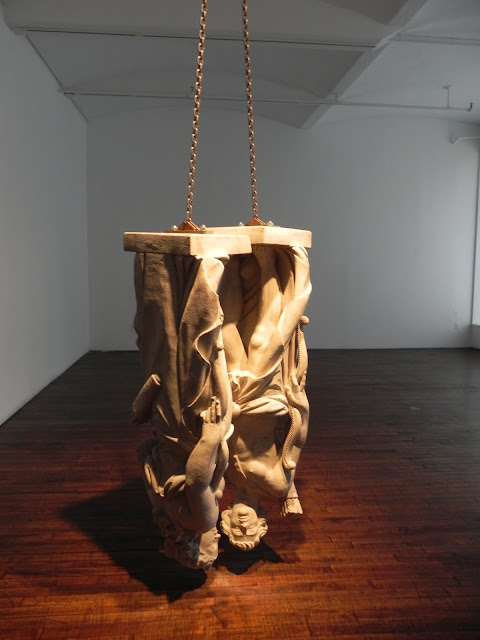 Finally, To Dust (2009), a piece by Jonathan Schipper. Here, there are two cement busts that bare strong resemblance to Greek god and goddess have been suspended upside down from the ceiling. While swaying back and forth, the two figures literally when come into contact with each other actually rub each other into dust. This is a piece that would draw me back to the gallery later on just to see its transformation and whether they actually mutually transform together slowly but surely into one. In this, I tend not to see it as an act of destruction but rather the act of love of two apparently separate entities gradually come into being one wholeness, then perhaps into completion as something new altogether. I highly recommend going to see this final installment of Under Destruction currently on view until August 7.