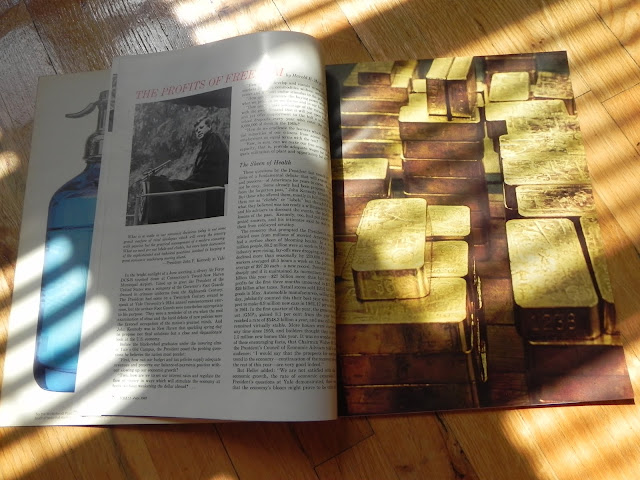 There is much to do on this Saturday, instead I have chosen to be in the state of reverie. Partly inspired by my movie experience last night of Midnight in Paris at BAM. Whether you have or haven't seen it, the entire movie is dedicated to someone who chose to live in the past, in his imagined L'age d'or of which things in the past are always incomparably better than in the present. This is only an attempt of a crude description of the movie. Yet, this idea of someone who is extremely nostalgic of the past as portrayed in the movie felt endearing and close to home, because I saw a bit of myself in the character.  As someone who rather spends all her time antique-ing somewhere in small and quaint American towns than doing anything else, I would like to share this accidental but precious find I stumbled upon in an antique warehouse, shope called Old Glory in a town called Frederick in Maryland.
USA 1 was a magazine that covered politics and culture to put it in a general sense. On this cover, the picture is named Most Wistful and it shows an aspiring actress who journeyed to the country for a touch of sun and a chance to star. The elegance of this photograph intrigued me so much as to purchase this issue. Although most would say that never judge a book by its cover, me on the other hand tend to always go for the surface of most things, and face the mysterious certainties of my discoveries - with exhilarating and also at times dismal outcomes. Today is a day for reverie and therefore, out of the window goes the dismal result. This find is fully of lovely coincidences and revelatory tales, some of which I shall take you through along with the next few images. 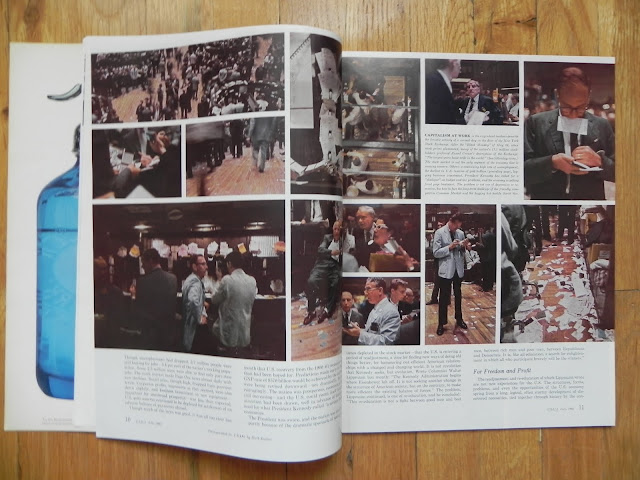 In the bright sunlight of a June morning, the President of the United State had come on a Twentieth Century errand to speak at Yale University's 261st annual commencement. This was during the period in which the country was facing a economic crisis, and in the speech by President John F. Kennedy at Yale came these words: " What is at stake in our economic decisions today is not grand warfare of rival ideologies which will sweep the country with passion but the practical management of a modern economy. What we need are not labels and clichés, but more basic discussion of the sophisticated and technical questions involved in keeping a great economy machinery moving ahead." This statement still has its relevance especially with our economy today, something tells me that even though we seem to have departed from the past but only little have changed for the better. This next picture shows the frenzy on Wall Street and the pictures are audacious titled as Capitalism At Work. I say audacious is because for someone who came from communist China, and in the 60s right around the same time of this publication, the mere mention of the word capitalism in any context would have sent the editor to his persecution podium with the red guards mercilessly beating him out of his consciousness.  However this is another topic is for another day.  Now, I should probably retrain from traveling down that path of nostalgia but save it for a more apt opportunity. 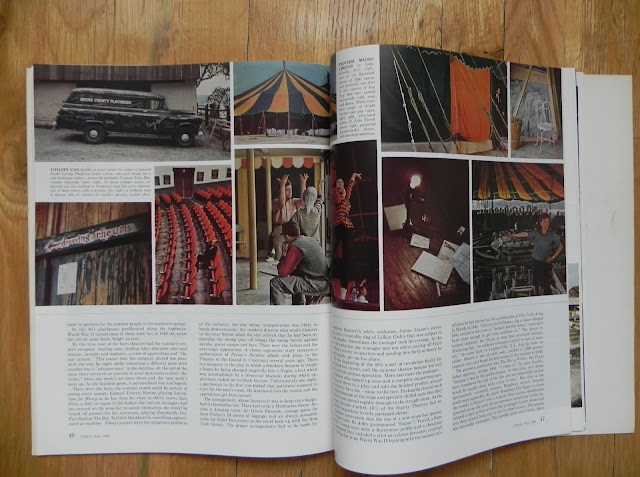 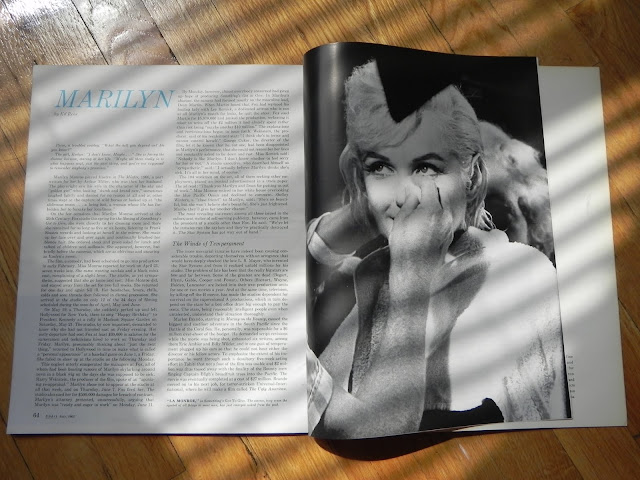 Coming back to Saturday reverie, I bring you to the reverie of arts. To arrive closer and next to the elegant aspiring actress on the cover. These above photos show behind-the-scenes production, transportation, staging directions of local summer theaters. There is something irresistibly charming about the old car that says Bucks County Playhouse, it looks like the vehicle was both a playful prop and back drop as it might have served as a mode of transportation for actors and the equipment on site. All photos convey the summery mood of community theater fever, made of people who were just passionate about their productions.
Meanwhile, the producer and director of Something's Got To Give felt just the opposite of their star and the production of their film. The last article of this magazine concludes with an article on Marilyn Monroe's final movie-star project before her sudden and mysterious death.  Something's Got To Give was her last movie and it was never finished partly due to her lack of presence on the set and numerous tardiness. One of the absence was due to the fact that Monroe had chosen to fly off to New York in order to sing Happy Birthday to President J. F. Kennedy at a rally in Madison Square Garden. From my own research and personal interest, Monroe was an actress that had a side of profound talent and fragile emotions that unfortunately never fully developed and translated onto most of her films. Due to a traumatic and unsettling childhood, Monroe had carried this innate sense of loss and feeling of loneliness all her life. Personally, I find myself at times able to identify with this peculiar emtional trait that when one's exterior presentation to the outside world bare little psychological consistence with what one actually feels about herself emotionally. In that case, it should take a tremendous amount of strength and positive perspective in order to carry on and to be able adapt one's physical and emotional being into the actual physical surrounding optimistically. With failed marriages and desperate attempts to bring herself back, Marilyn Monroe tragically succumbed to her hopeless nostalgia and the loss of someone and something she felt that she could never quite recover from. Here is a portent coincidence about the timing of when this issue was published, and that it was just one month before Monroe's death on August 5 in 1962. In one of her best movies and almost her last, The Misfits made in 1960 and a role written by Arthur Miller, her husband at the time gave Roslyn her character this very sad and at the same time very poignant line:

Perce, a troubled cowboy: "What the hell you depend on? Do you know?"
The girl, Roselyn: "I don't know. Maybe..." She is facing the distant horizon, staring at her life. "Maybe all there are really is is what happens next, just the next thing, and you're not supposed to remember anybody's promises."

If you are curious to see Marilyn Monroe on screen, BAM is showing her films and this is the last weekend to catch them. 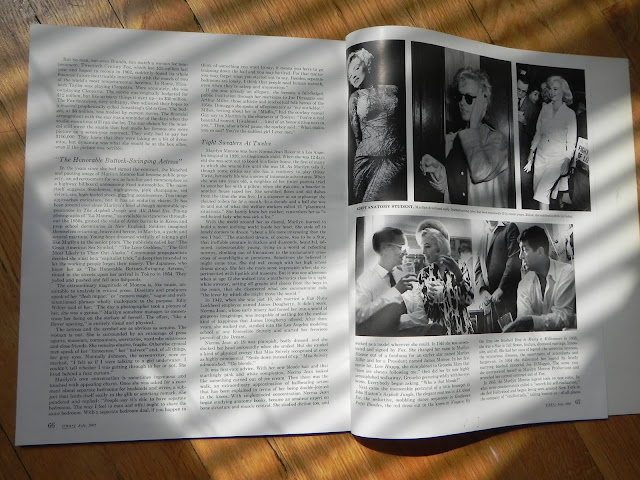