A few months back, I had the pleasure of meeting Gillie Holme a charming British artist who has been a long resident of New York City. After she had sent a few images of her works to me via e-mail, I was immediately intrigued to see the works in person. What struck me of her work was this strange and mysterious mix of melancholy and static beauty. Her uncanny photographs taken of window mannequins from a high-end department store like Bergdorf Goodman did not at all seem recognizably like dummies. To be quite honest, I had to be told the first time that I was actually admiring the artificially man-made fiber-glass feminine attributes instead of that of a real person. This was a very interesting revelation of how I identified with the mannequin, something that was made to mimic a real woman but somehow looked more real than an actual a human being. Perhaps it is because the exterior beauty status of women nowadays has been so fictionalized that real people have begun to look to be more like fiber-glass made fixtures. 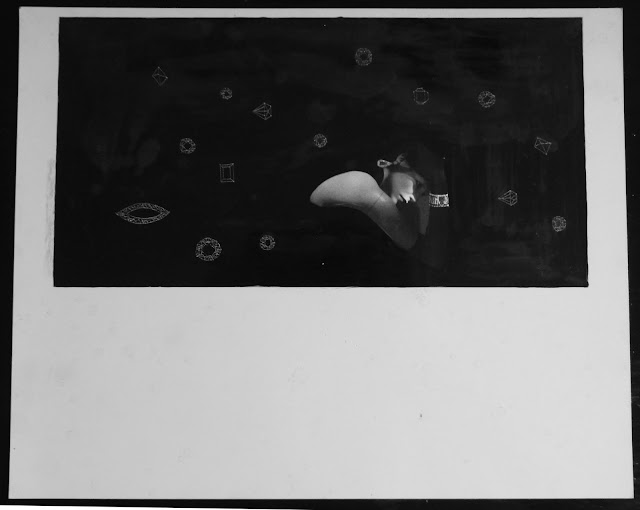 In this image, Gillie painted the photograph over with black ink and while isolating the posing mannequin from her original surrounding props she looks to be more alive like a real-life human being. It is only much later when I noticed the fine line that connected her arm to her shoulder that it proved itself to be a dummy. The gaze of the mannequin suggests a romantic state of reverie, at the same time the light and shadow reflected on the face of her plain emotions heightens her surreal sense of being. She seems to be floating in a dark sea of glittering gems and diamonds. For the diamonds that are swimming around her, Gillie scratched into the black ink and placed in the line-drawings of these precious stones that look like the demonstrative technical drawings one would see in catalogs that give information about certain different cuts of the stones. While the shapes of the stones also have very strong suggestions of the feminine form. To me, this image also seems to reflect the state of popular female fantasy in the midst of our consumer culture. In glossy advertising layouts, only the beautiful women are surrounded by real diamonds and if one wishes to be beautiful then she must wear those diamonds. However in Gillie's version here, the fake ones could easily do the same trick as convincingly as the genuine. 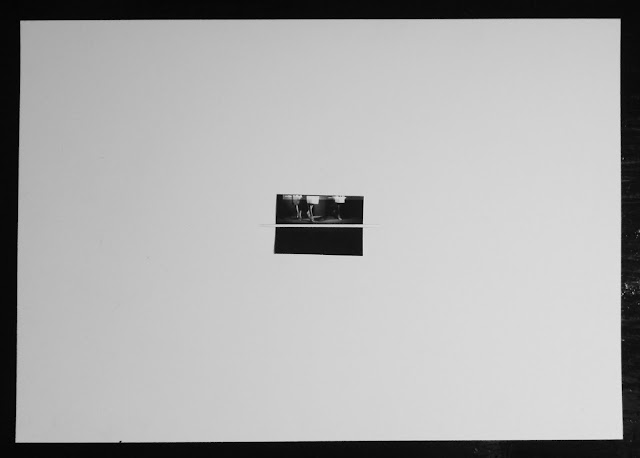 For this one, again, I was not sure if I was looking at real people or dummies. At first it looked like an image of elegant ladies in movies from the 1960s. Since the photography is so small that is almost like the small images one would see on a contact sheet from a photo-lab. Gillie and I also reminisced about how in the old days, the entire photo process was done by hand. From the nervous anticipation of opening the mental canister in a pitch dark room to the exciting and often times surprising moments when the image begans to take form while being submerged in a tub of chemicals. With the instant and more modern technology of digital photography, one easily forgets the variable aspect of processing photography in the old days that also depended on a little serendipity. Underneath the pretty little feet there is a strong white line, this line is actually a thin strip of paper that Gillie had carefully carved out and quite intentionally placed onto the photograph. When I asked her why, she replied that at the time she was interested in the medium of paper and its possibility as the vehicle for presenting and supporting the image. In other words, here she is exploring the tense between the vehicle of the image presentation and the actual image that is being presented. Further more, it touches on the essence of how images represent this relationship activated by the imaginations between the viewer and the artist. Speaking of tension and act of imagination, there is something S&M about this piece to when I first picked it up. Here the carved out paper strip seems more firmly and aggressively applied as oppose to the gingerly insertion seen from the previous one. Also the pose that the mannequin is striking here looks more domineering than in all the others. Because the pictures are quite small, it is hard to tell from first glance whether this bare-back lady is wearing some kind of chains and belts on her dress. Then immediately, this idea is countered by the window reflection of the architecture that was directly facing the window, and that this is another one of Gillie's Bergdorf dummies. What I like about this image is that instead of the soft elegance of a lady, this one seems to also to convey an edge to the projected personality. Whether it is intentional or now, her pose, the placement of the paper slashes, it being a black and white image of a dark brunette all seem to set a different mood than the more popularly assumed submissive feminine nature, After all, Gillie herself seems a little bit punk-rock despite her sweetness and charms. 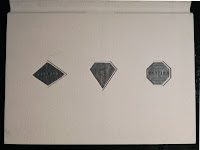