August 28, 2011
In the midst of this uneventful hurricane weekend in New York, I find myself reminiscing my summer vacation in Paris. There was something very pleasant about having a relaxed and somewhat unplanned agenda of roaming streets of Paris and cafe wine-drinking while munching on cheese and crusty baguettes. However, I did not entirely forget to visit a few museums while I was there. When a good friend of mine and I decided to pay a visit to Musée Rodin we ran into some unexpected contemporary art. Upon entry through the garden just before approaching the old estate, there stood three large-scaled cast aluminum sculptures by the Swiss-born artist Urs Fischer. 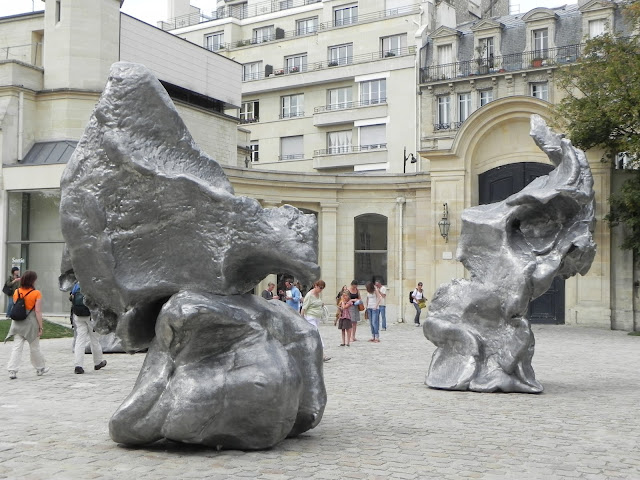 I first became familiar with his work when he had his first American solo museum exhibition at The New Museum, ever since then I have felt more intrigued. Urs Fischer has done his most interesting works in sculpture and with architectural interventions. Once he built a full life-scale house entirely out of bread and left it to its natural decay. He also excavated a large hole in a gallery floor and attracted visitors to contemplate its void and destruction. Other times, he constructed a melting piano with rubber painted in neon purple to betray our conventional perception and notion of this grand old musical instrument. More humorously, he dig a hole in a wall then placed a motion-sensor rubber tongue that surprised every visitor who was curious enough to stick their head close to that hole. Then of course, only to be surprised by this amusingly forward tongue and cheek gesture. I have also admired his chrome-box series of which all sides of the steel boxes had screen-printed photo-realistic images of every day consumer products from food to feminine cosmetics to popular buildings, comic characters and other variously familiar images of our pop-culture. Since the chrome boxes all had reflective mirror surfaces, when the images were placed on top, the viewers were inevitability being placed within the images by reflection and confronted with the inescapable reality of consumerism in our contemporary culture. Addressing and poking fun at contemporary culture might have been one theme that occupied Fischer's mind, however when these sculptures were placed and compared with Rodin's sculptures, the works also seemed to be examining the role of the artist as an artisan, the maker of objects by hand. This is something additional but not exactly inconsistent with his usual irreverent humor expressed through mundane objects and interventions. 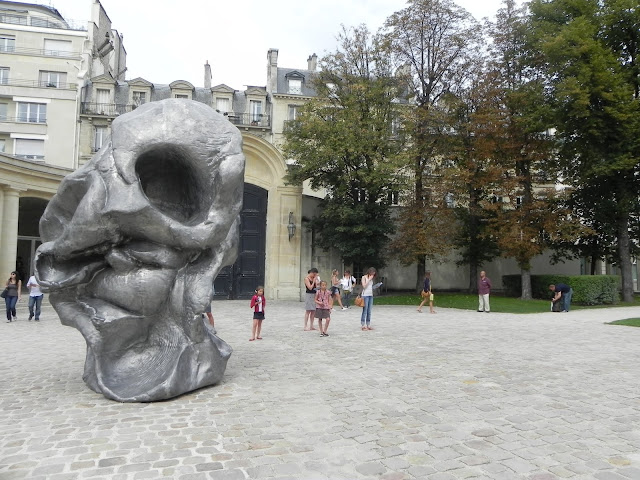 These hulking sculptures have names like Miss Satin and Marguerite de Ponty, taken from titles of poems by Stéphane Mallarmé, a 19th century French poet whom has been categorized as a Symbolist writer and poet. Symbolism evolved as an anti-idealistic style to represent reality, and used humble and ordinary themes rather than ideal or heroic themes. It was also an reaction in favor of spirituality and dreams. Fischer might have been a fan of Mallarmé's works and thus producing these enlarged malformed pieces that also looked to be something out of a dream or sheer imagination. To start, these shapes were molded out of clay that were only about the size of the artist's hand. Having been a photographer, Fischer then took numerous digital photographs and scans of these hand-molded clay and blown up the scale to about eighteen feet tall. Most noticeably were some of the thumb prints that the artist has left on the pieces during the process of molding. By expanding the size to such a grand scale, the physical presence of these pieces transformed into something more figurative rather than abstract. In that I mean, this decision has resulted the physical presence to convey more figuratively and thus visually dominants over its abstract elements. If it had remained in palm-sized then perhaps they would not have taken on this figurative presence. While the contrast between the negative and positive spaces caused by the manipulation of the hand made the pieces to visually assimilate some of Rodin's more figurative pieces molded more precisely and realistically after human bodies. 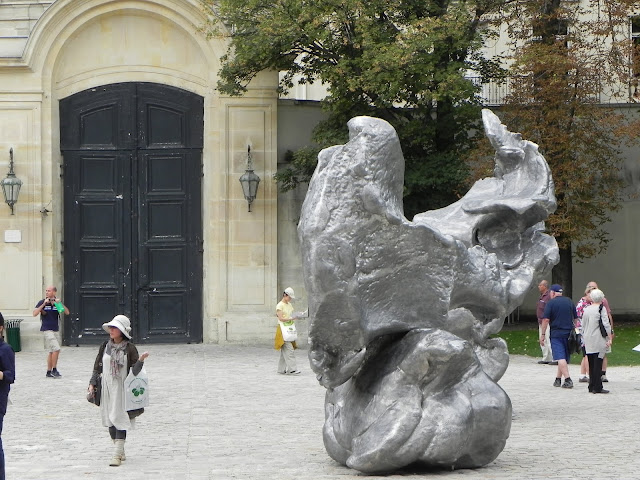 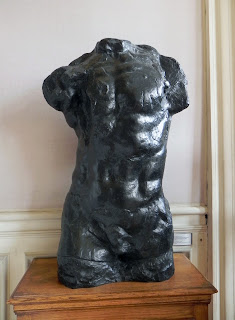 Rodin has been one of my favorite 19th century sculptors because of his ability to translate sensuality and at the same time visually manifest a struggle between extreme conflicting human emotions. Rodin's unconventional presentation of the human body was very different from his peers and against the tradition of his time. Like Symbolism literature, Rodin often times worked against idealism or to stylistically present the human body. Instead, he depicted the human body in their raw flash emphasized by embedded marks of the artist's hand. There was a time when he was accused of taken a cast from a living model. Here in this piece, the torso was stripped of its head and limbs yet the piece presented precise details of the human form and musculature. The deeply pocketed surface with its negative and positive space unevenly reflected by natural light brought out the raw flash of a man's torso. The slightly twisted posture seemed to convey a sense of pain and physical struggle. 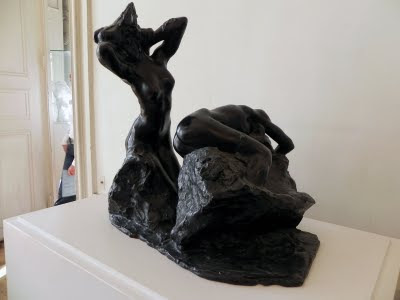 I could see why the curator thought it appropriate to place Urs Fischer in Musée Rodin, since both artists took this very tactile approach in sculpting. Rodin made sketches in clay and his surface modeling gave every part of his works of the human bodies an articulation both in physicality and in emotion. For the aluminum pieces, Fischer first worked with a small piece of clay in his hand and manipulated the positive and negative which then gave physical forms to the sculpture. The end results all seemed to convey a vague human presence with exaggerated dramatic effects. Further more, both artists seemed to be presenting sculptural fragments rather than a sculpture in the whole, which is to say that in both works they appeared to be parts extracted or something emerging from an abstraction. Consequently, the pieces seemed to carry the visual emphasis that heightened the sense of their physical being. However, there were some distinct differences that I liked in both artists' works. For Fischer, I liked his sensibility in showing playful humor by making something apparently so grand and intimidating in size from something that started off as just a hand-sized clay-model. Also when he blown up the sculptures to their bigger-than-life size with visible finger prints, Fischer made the point (but not without some humor) of the sacredness of the artist's hands positioned throughout the history of art as hands of god and that only from his hands such grandiosity and truth of expression could be achieved. Rodin, on the other hand had made large sculptures of hands as a way to emphasis his personal genius that was closer to the hands of god. Although, Rodin was not in any way poking fun at this idea as oppose to Fischer. However the tactile approach and the raw, perhaps unfinished look of Rodin's works indeed conveyed this sense of a higher being. In that I mean, he not only presented the physical but also the spiritual, emotional and the sensual aspect of his subjects. His unique approach and style in many ways transcended his sculptures beyond their physical material. Below is a video taken while I stood at the window in Rodin's estate overlooking the Urs Fischer.