September 14, 2011
The theme of seeking refugee and the idea of making a home away from home as a way to reconcile feelings of displacement of one's native home continues in my part II of Seeking Shelter post. In my last post, I mentioned the work of a Colombian artist, Miler Lagos who built an igloo out of books he found from a defunct US Navy library. In a sense, he established a personal space and a private escape into which the feeling of security derived from one's self learning and the comfort of enriching one's own mind. Meanwhile across the street in Lehmann Maupin, there was a work called Fallen Star 1/5 by a Korean artist named Do Ho Suh in similar vein but also quite different. Rather than building a secure grounding for a new home, Suh audaciously presented the unsettling feeling of being dropped into a foreign place as if it were utterly unanticipated. As described by the artist the feeling of landing in the US was "as if he was dropped from the sky". A fairytale-like story that Suh constructed in which he described the feeling of being lifted by a tornado then it dropped him and his house on a building in Providence. 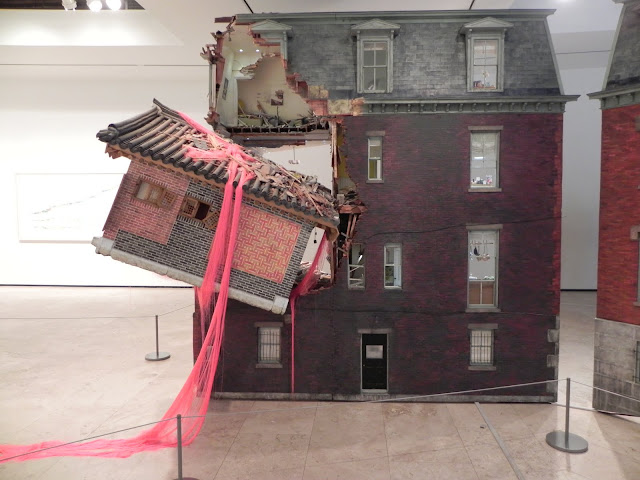 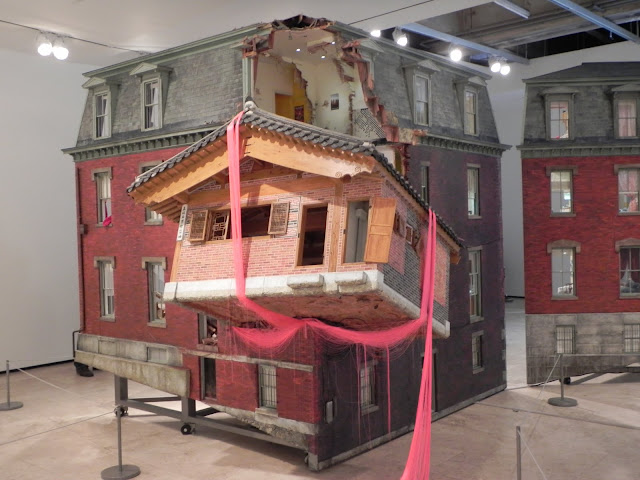 From an interview, Suh talked about his fascination of exploring the relationship between the idea of one's physical space versus the psychological interpretation of the physical surrounding. Through making other works, Suh discovered that the notion of the physical and the psychological space differed greatly when compared among the people of his home town in Korean and those who inhibited the city of New York. For this piece, the approach was more personal and based on his experience of having first arrived in the US in 1991 to study at RISD. To articulate this feeling of being uprooted and displaced while trying to find ways to adapt, Suh constructed Fallen Star 1/5. 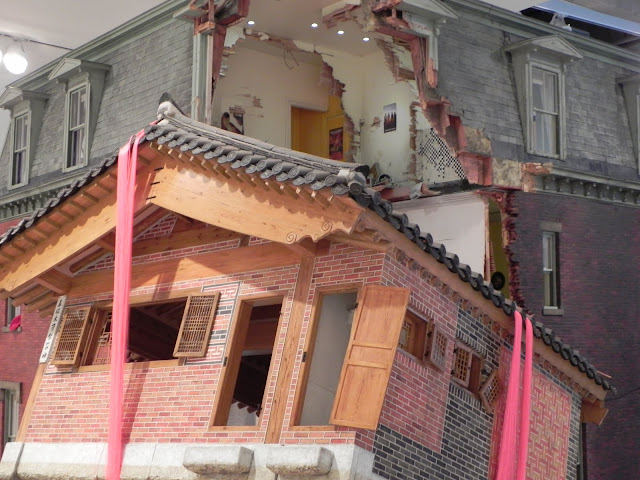 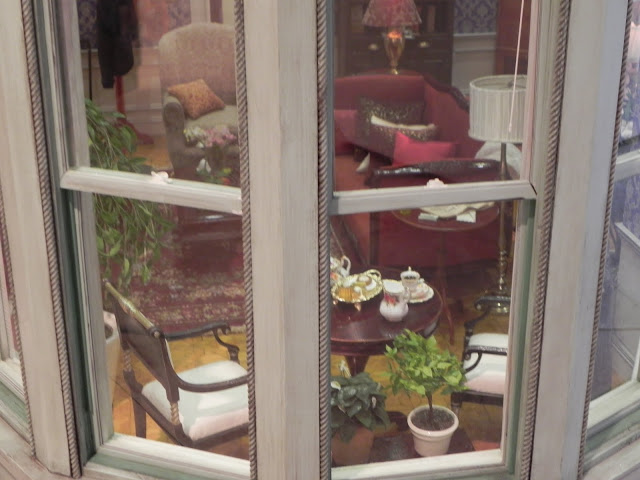 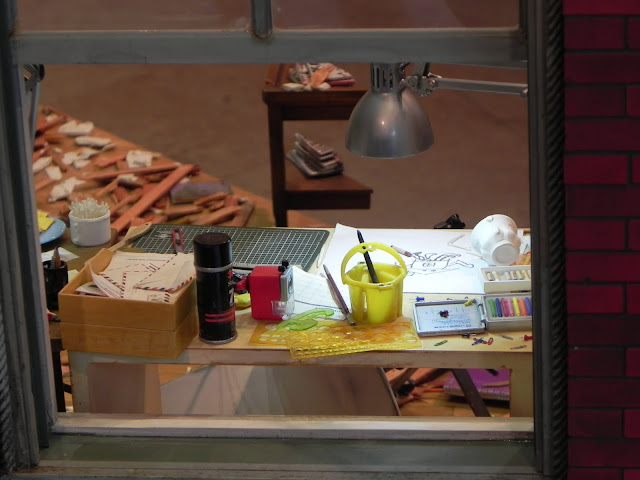 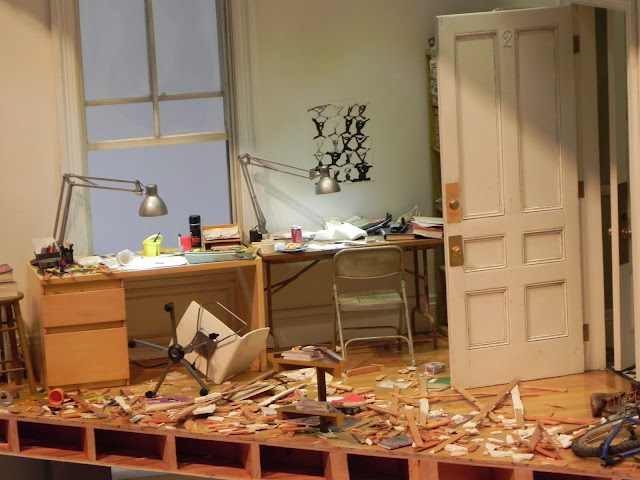 To construct this meticulous home replica, Suh used various mediums including fabrics, resin, and Styrofoam. A tremendous amount of dedication and labor were undeniably invested in order to produce in such precise measurements this multi-layered complex structure. Behind the exterior facade, the interior of the house was laid out with even more ambition and rigor. Here is a view of a tea room and in it, everything was arranged as of someone had once occupied the space. What made it such a fascinating piece to see was the amount of details it housed. They did not look as if just static displays but rather as spaces that seemed they had once been used and perhaps been through some heavy weather of mother-nature. 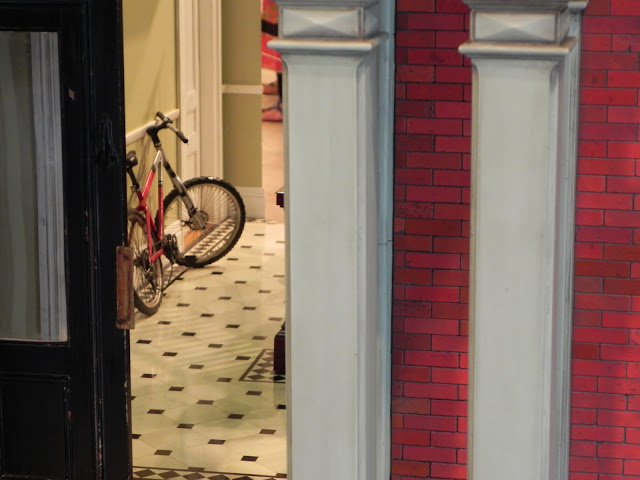 Interestingly in this piece, the physical components seemed to present a well balanced mix of ruins juxtaposed with the rooms that were intact. For example, the main entry hall that led to the tea room conveyed a warm and secure feeling of home (I especially liked the bicycle leaning against the wall and the black and white tiled flooring). While on the other hand, the work studio seemed to be in complete shambles. These must have been conscious choices made in order to convey and retain the safe security of a home despite that it might be a transitional one.  Or perhaps it just simply implied that no homes were absolutely secure and happy. Even among the most unified families there exist inevitable conflict. 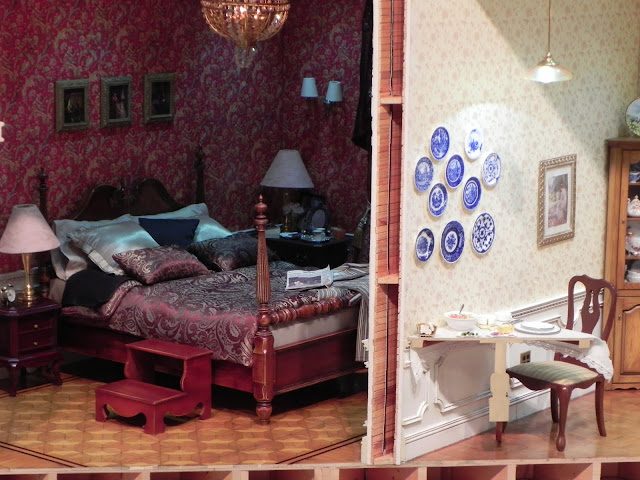 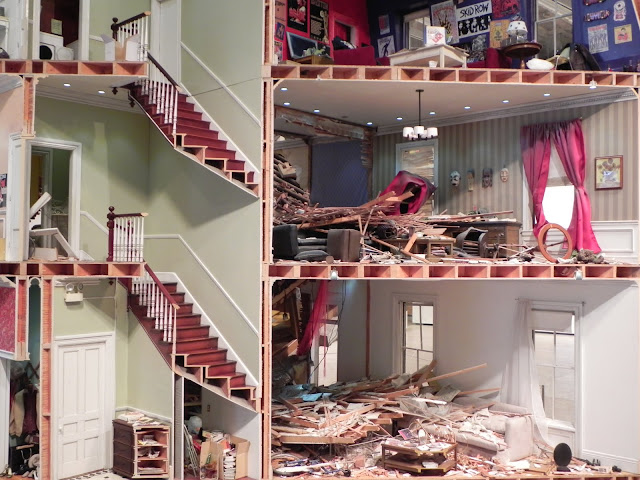 Suh's comment about his own displacement explained the motivation behind his work. From the same interview mentioned earlier, here is what he said: "once you leave home, it's not the same place anymore. It's quite an unsettling feeling like you don't belong anywhere." Then again, maybe the only home is just where the heart is. If you want to see Home Within Home, it is currently up at Lehmann Maupin until October 22. 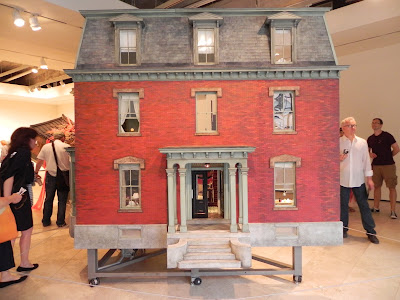