Behind all that glitter and color - Part II alien tribe

Compared to For Now at Mary Boone Gallery, walking into Ever-After at Jack Shainman Gallery felt like entering upon a remote planet of unearthly creatures. Not only were the colors used in this exhibition looked more restrained but even the physical forms of the pieces seemed to have more uniformed structures than the last exhibition I wrote about. What was equally astounding about these Nick Cave pieces was the elaborate fabrications, the scale and the overall physical forms. Though like mentioned, the color palette seemed toned down and the constructions were more uniformed, consequently these pieces conveyed a stronger feeling of estranged alienation. This sense of alienation had a different mood from the exuberance seen at Boone.  In this exhibition, there was also a strong presence of the collective versus the individual with a touch of tribal ceremony feeling. 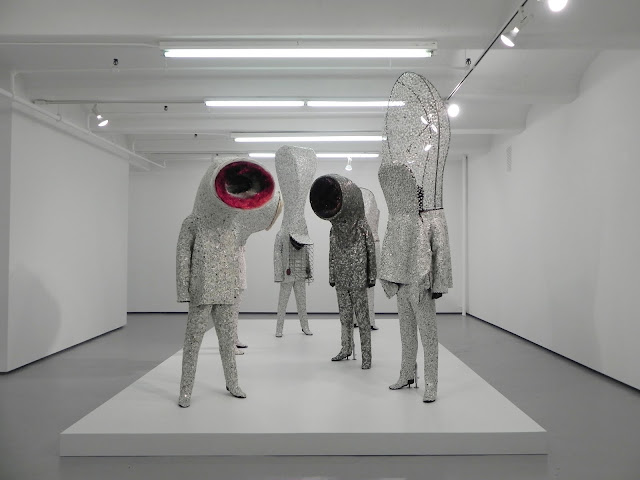 In the center of the gallery were these silver-toned pieces that looked like they could have been space suits from futuristic movies of the 1960s such as Kubrick's 2001: A Space Odyssey or Barbarella. Maybe the latter seemed a bit of a stretch, but the feeling of being among a tribe of aliens was strongly present. The 1960s mood I felt came from seeing the pant-suits worn on these figures. The tunic styled upper garment paired with straight-legged pant legs that came all the way down and then gave the visual impression as if they all had on a pair of Chelsea boots underneath. 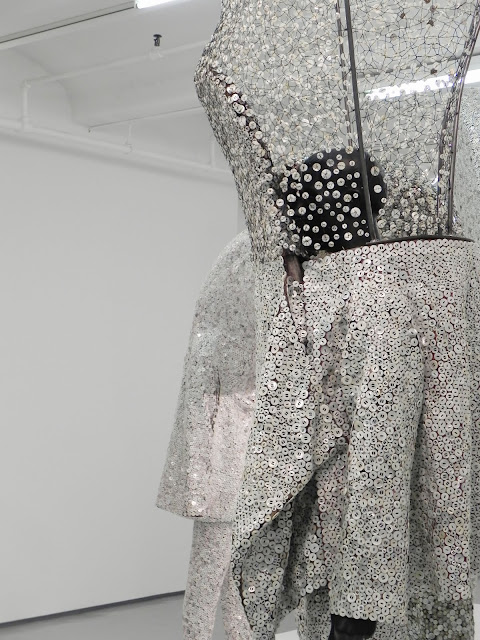 Seemingly fabricated with silvery material or textile, but what was not immediately apparent was in fact the pieces were made with tiny little pearl buttons meticulously and tightly sewn together onto the fabric. By carefully selecting the colors and shades of these pearl buttons the overall visual effect of the textile had this light-reflecting quality. Each button varied just slightly from one to the next either in soft yellow, white or off white. Additionally, the colors of the thread used in these pieces also shifted from black to red to off white and thus added to the optical illusion of the material. This laborious hand-process was evident in all the pieces and echoed the haute couture style I had seen in For Now. 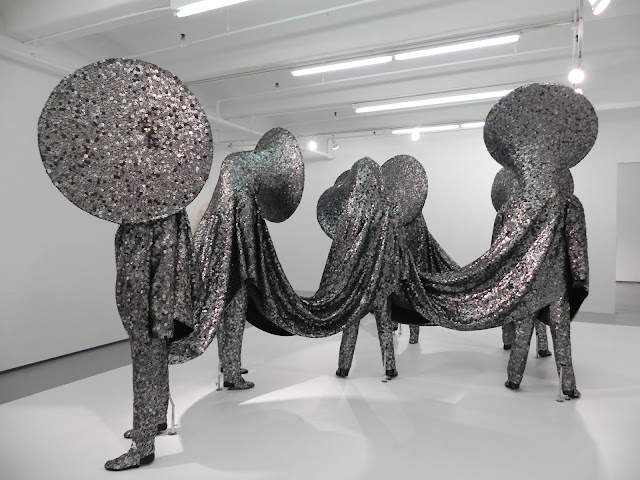 Absent from the For Now exhibition was this presentation of a single piece that encompassed a collective of six figures as oppose to something that was made for one individual figure. Here was a piece of Soundsuit that took six models to wear and expand to this slightly morbid but glorious shape. Here, the idea of a tribal collective was visually conveyed that also seemed to suggest a sense of unified ceremonial ritual. Even though at the For Now exhibition there was also the sense of tribal rituals, however since the figures were physically connected here and thus the ceremonial aspect felt stronger than the individually presented pieces. 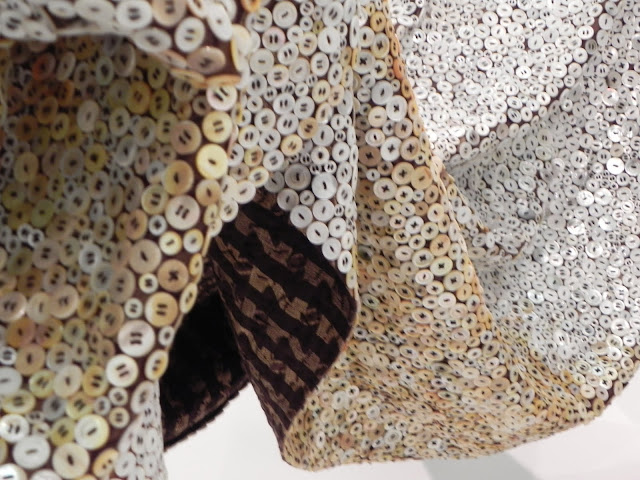 One last thing I noticed was that Cave used textiles and fabrics that were patterned with prints rather than using just white or plain sheets of fabric. From the little detail that I was able to see, the back of this fabric appeared as if a piece of textile from South Asia or Africa where intricate patterns had been incorporated in the original work. With this observation, it seemed that by covering up the original patterns that would have otherwise identified the origin of textile, Cave intentionally homogenized the materials and erased their individuality to produce one visual unity. Concurrently, this somewhat implied the idea of a society in which diversity was not openly celebrated but appreciated only if it was revealed in small quantity with careful discretion.
Email Post