November 01, 2011
The New Museum has long been known to showcase works that push boundaries and challenge conventional definitions of art. On October 26, the museum opened Carsten Höller: Experience and what is amazing about this exhibition is that it invites visitors to experience the works with their own bodies rather than to observe passively. This is a step beyond arousing and indulging just the visual sensory of which is just one of our physiological capacities. By offering a physical experience the exhibition attempts to renew our awareness and to let us re-acquaint with daily reality. For Carsten Höller, the reality is very much uncertain and that we are constantly living in the flux of disorienting situations. Furthermore, drawing on his background as a scientist of phytopathology (plant pathology – science of diagnosing and managing plant diseases) Carsten Höller has turned the museum into a lab in which the visitors are simultaneously the subject and the object. While this sense of ambiguity of whether one is being tested or testing the subject matter with the artist makes it a highly worthwhile experience. 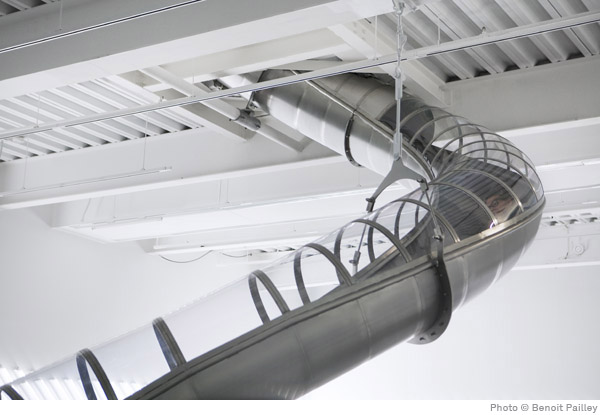 The most spectacular piece of the exhibition is this one that has been architecturally integrated into the museum's interior structure. This is the first time that the slide has been installed through the floors of a building, for its previous installations it had occupied vast open spaces. By drilling holes through the floors, it shows the museum's insistent commitment to showcasing thought-provoking works and in this case it also shows its leniency to such an extent as to accommodate works that partially compromises its own architecture. Not so surprisingly, this proves to be a mutually beneficial venture; while the artist gets the opportunity to introduce a new way of transporting visitors physically through the space, the museums gets the opportunity to show its unrelenting desire to break its own mold (both with the architecture and the curatorial practice) and thus crossing over yet another kind of boundary and into new territories. What I like about CH's works is that based on his curiosity and endless scrutiny of doubt and uncertainty, he conducts human experiences and is unabashed about utilizing the museum visitors' physiological, psychological and biological capacities. Here as Hal Foster puts it in this essay for the Guggenheim exhibition catalog called Carsten Höller: The Confusion Machines of Doctor Höller: " The Human is a category that Höller plays with as in a game, probes as in a test, or deranges as in a semi-mad experiment, and it is in this double crossing-of gallery and lab, and of game, test, and experiment-that the primary interest of his art lies. In this blurring of game, test and experiment, the viewer-visitor is also blurred: he or she becomes a hybrid of player, datum and analyst in an event-space in which the goal is less the understanding of the object than the intensification of the subject."

While spinning off of the idea of intensification of the subject, Hal Foster also wrote in his other essay ( this one is titled Test and can be found in the New Museum catalog for this Cartsen Höller exhibition ) stating that; "the position of the viewer is blurred while in the context of the museum as a test lab for experience of transformation."

In other words as I mentioned earlier, while experiencing the exhibition it persistently feels unclear whether we are being tested for our reactions or is it that we are testing the technical condition and performance of the contraptions provided by the artist. Nonetheless, this tension between being both the object and the subject simultaneously deems to be worth further investigation. To experience the slide, one must be brave enough to slip all the way down (to ensure a smooth ride, canvas slide covers are provided to be pulled over and cover any bumpy part of the wardrobe) without pre-conceiving the physical state of where one might end up. Here, not only is CH inviting the visitors to a mysterious ride but while participating he or she also gets this feeling of bliss that  also evokes a sense of innocent childish elation. This combination of sheer bliss and senselessness is manifested through this other work called Mirror Carousel, 2005. 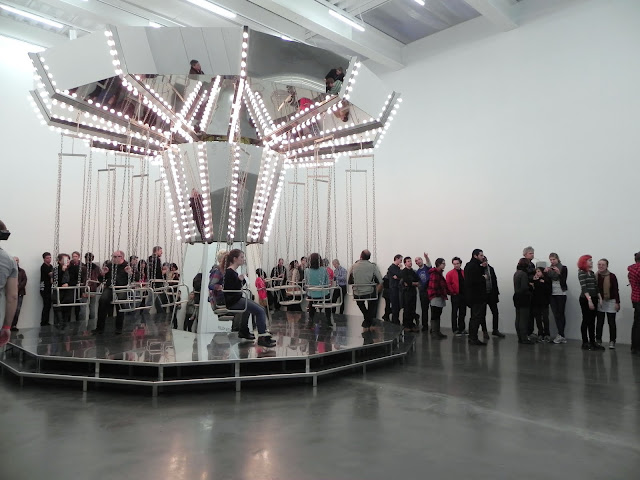 This piece consists of mirrored panels that confronts the visitors with their own reflections while at the same time offers a sense of disorientation as the carousel begins to rotate. The flashy light bulbs serves to mimic the festive decoration of ordinary a merry-go-around that one might see in amusement parks. The irony of this piece is that the speed never quite picks up, in other words while the visitors are riding the carousel some might wonder why it seems as if it is hardly moving at all and where is the thrill? The takeaway here is that, CH is not purposely trying to replicate the thrill of the merry-go-around experience, but he is more interested in bringing new awareness to our senses and expectations of the ride. Since the visitors are made painfully aware of their own presence while being spun under such a mild speed, it inevitably makes them re-examine the initial desire and expectation of participating in such an activity. At that moment, the idea that they are in the museum riding an piece of art might begin to make more sense. By inviting visitors to physically engage with his ready-made carousel, CH has transcended Duchamp's idea that art should not be just a retinal experience.

Here is a video of that gives a general sense of what happens at the other end of the slide. For Part II of my posting, the question of experience vs. experiment continues...

Untitled from Chennie Huang on Vimeo.