November 15, 2011
This piece is supposed to have gone out the weekend when the exhibition opened on November 4th at Guggenheim, instead it is getting posted nearly two weeks after its opening. The delay has been due to my spending too much time reading reviews on this exhibition. Somewhat surprising, this is not the most praised retrospective that the Guggenheim has given to a living artist. While others were more articulate in describing the specific dislikes, but also there was a few just seemed to be riffing off of the same dislikes. Though I would agree with some that All (is the title of this Maurizio Cattelan exhibition) is a sacrilegious and perverse exhibition to some degree for a Guggenheim retrospective, however I would also like to differ from those that claimed Maurizio Cattelan to be simply a cheeky jester of the art-world and without his own ideas.

To say that Cattelan is just an irreverent jester is not entirely just. Even though I am not a one-hundred percent fan of all of his works, however those that saw him only as a prankster seemed to be just touching the surface of the matter at stake. In some cases, through his work, Cattelan vicariously presented a mirror reflecting what has been going on within the system of art-making, exhibiting, selling and providing to some what they precisely waited to be given - silly and ironic entertainment. 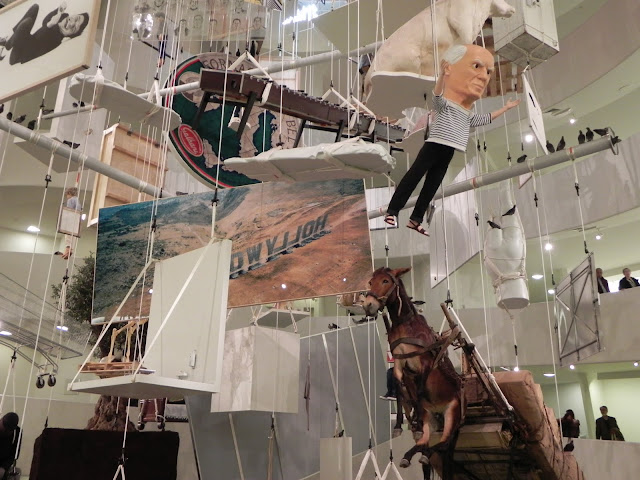 For me, the more important question is the one of the curator's role versus that of an artist. Since Spector gave the green-light to Cattelan's vision of how he wished the retrospective to be and thus she perhaps partly compromised herself as the curator. While the end result has been a mutually beneficial one in terms of art-marketing both for the artist and the museum, however one can't help but ponder whether the museum has given up just a little too much control?

Even though some are criticizing how certain works in the exhibition have been taken out of context and not exhibited the way they initially designed for and thus took away the initial impact or meaning. More specifically, speaking of works such as La Nona Ora (1999) showing the Pope John Paul II hit and fallen by a meteor, rather than occupying an room with a red carpet covered with scattered broken glass to suggest that the meteor had violently broken through a church window before hitting the Pope is now just resting on a little rectangular-shaped red flooring, or Frank and Jamie (2002) the wax effigies of life-sized New York cops are now upset down rather than in the original context of which they could be mistaken for real people, or All (2007) consisting eight marble pieces that look like dead bodies covered with white cloths but is much different from the first time I had encountered the piece when all eight of them were laid out next to each other and hence gave a morbid feeling of a mass-grave, but now the piece has been taken apart and each marble piece is hung separately throughout the entire composition.

Rumor has it that Cattelan mentioned All would be his last show and after this he prepares to embark on new endeavors though he has not confirm just in what and how. When knowing this, it is no surprise that he has chosen to exhibit the works as they are. By taking away the original context, Cattelan not only in some ways put a stop to the original flow of ideas he had while making the pieces, it is also a consistent gesture with his statement that in so many words announcing "that's all folks" (as the Looney Toons always say at the end of an episode). The visual notion of hanging also hints this idea of an execution, the morbidity is evident especially in some of his life-sized wax effigies of himself at various ages as well as of other life-like figures. 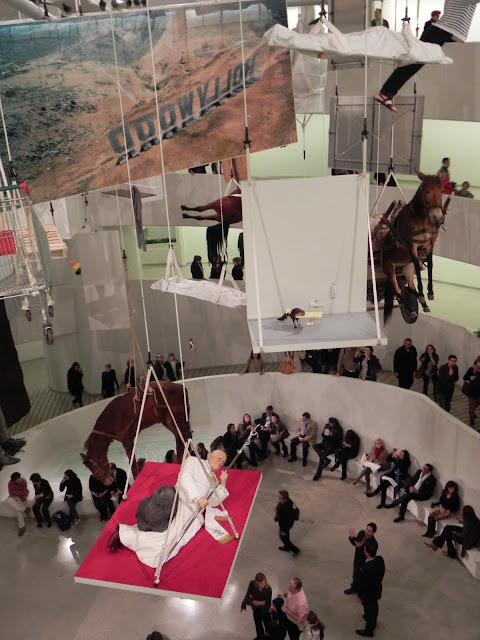 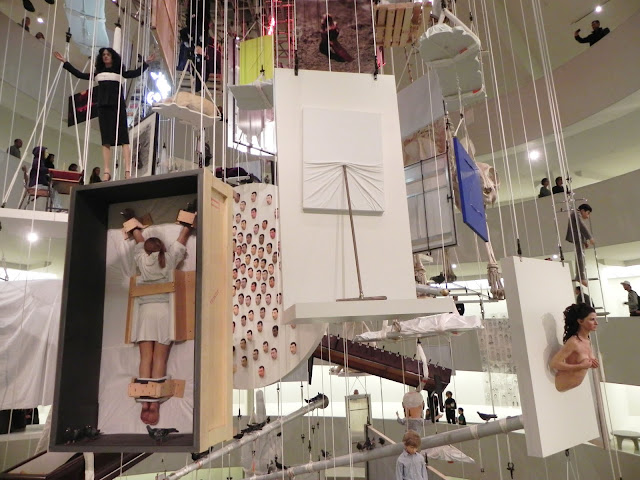 When the you are giving the opportunity to do a retrospective however as you wish, then inevitably you would have to take some of the works out of their original context. However, this could mean something new since you now have the liberty of pairing certain works together to make different kinds of references or heightening certain meanings that were perhaps not clear or changed from the previous place. Like for example, in Untitled (2009) of which shows a broom sticking up and appears to be disrupting the fabric canvas surface of what could have been a minimalist painting now looks to be more sexually explicit paired next to Untitled (2007) of which showcases a blond woman strapped inside of a wooden crate. If not exhibited in this fashion, the first piece could have been more easily identified as some sort of rebellion against minimalist painting and the latter as a critique of the objectification of women in the tradition of art history throughout centuries. 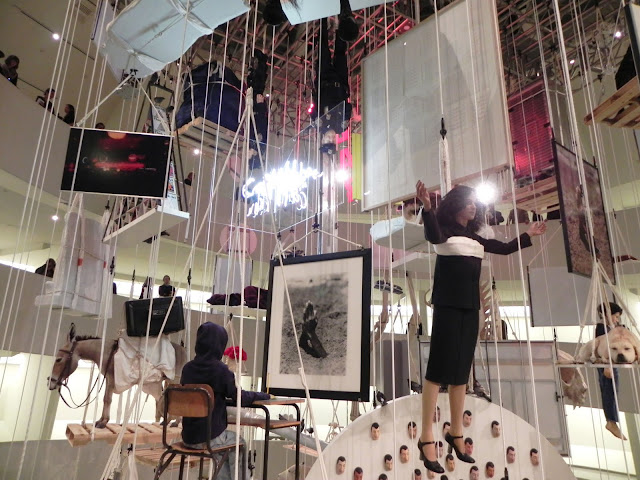 Another example plays off of the fact that Cattelan grew up in Italy mainly under Catholic religious teachings.  When we look at Charlie Don't Surf (1997) that is of a school boy obediently bound to his desk and appears to be studying then Mother (1999), a photograph of a pair of hands in prayers hanging right above the boy's head all seem to suggest the rigidity of his religious upbringing. Furthermore, this idea is reinforced by yet another authoritative figure as Frau C (2007) of which is a woman dressed in an austere and somber black suite with her arms outreaching as of a figure of religious transcendence. All three pieces if were exhibited separately could have taken on slightly different meanings though may not depart too far from the religious theme. 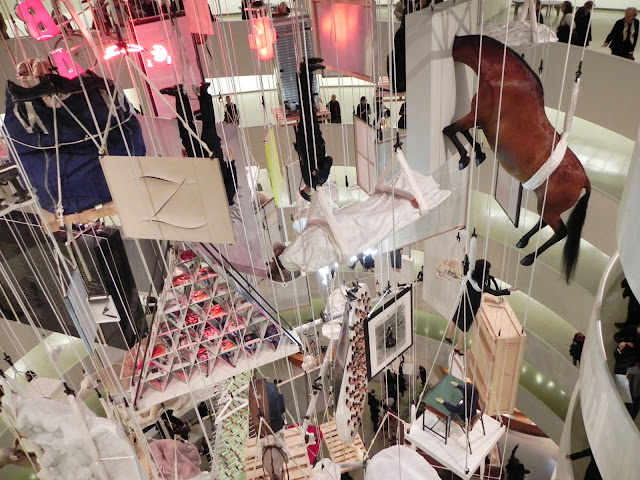 One more instance here Untitled (2007), a headless taxidermied horse seemingly have pushed its head through a dead wall looks more to be suggesting death when paired next to one of the eight pieces of All (2007) that of a marble-made and cloth-covered dead body. Whereas, when I first saw the headless horse was in a New Museum show called After Nature in which the piece seemed to suggest more of a humorous take on catastrophe rather than a dead-on statement about meeting its end or death as the marble piece suggests here. However, the humor is not lacking in this instance because Cattenlan's placement of these red neon drugstore sign (Untitled, 1997) seems to hint an inevitable medical emergency, perhaps of the headless horse.

During his life, Cattelan has taken on many odd jobs such as furniture-design or working in a local morgue, or working with taxidermy of animals. Even throughout his life as an artist, he has worked in installations, sculptures, photography and so forth.  One very amusing instance, once he could not come up with an idea for a show in time then decided to take works from another gallery and to exhibit them as his own in another gallery, or like in many years ago, he had people dressed up as Picasso with a giant head (so no one would mistake the art master mascot-like presence) in order to attract visitors to MoMa just as if it was an amusement park in Disney Land when a giant Micky Mouse would welcome you into a world of fantasy and child's play. In even earlier part of his art career, he started a magazine of which each issue consisted of pages ripped out of other magazines. With all that's been said and done, I wonder what the chameleon-like Cattelan is going to do next when All, this Guggenheim retrospective ends in January 2012?