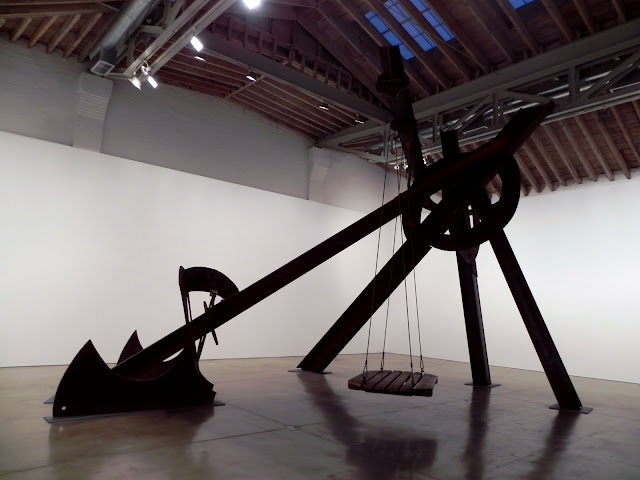 This post has been long overdue and it is going to be short. Two things that drew me to the piece, wait, make that three now come to think of it. First, I was immediately taken by the sheer massiveness of the thing and how well it visually integrated with the architecture of the space. Second, the name of the piece-Paula's pleasure. My title is actually borrowed from a Lynda Benglis' 1975 piece called Paula's Props, of which Benglis made props of Greek ruins with cheap material and laid it all on a piece of gaudy-looking deep purple/blue velvet fabric. See here for an image rather than sticking with my over-simplified description. I wonder how many other pieces are there made with Paula's name on it. By the way, I neglected a very vital piece of information-this sculpture is currently installed at Paula Cooper Gallery until December 23. Hence, the name Paula's Pleasure was actually after the gallerist herself and the same in Benglis' case of the 1975 piece. For some who has been around would immediately have recognized that Mark di Suvero was the artist at work for this piece. Personally, I have not been a huge enthusiast for large metal sculptures either out there occupying free public space or inside of galleries. However, this time when I got on the swing I realized how much I missed out on Mark di Suvero's intention for making some of the pieces.

Mark di Suvero has an interesting biography, born in Shanghai to Italian parents the family soon moved to California after he was about ten years old. From there, he received a philosophy degree but went on to make sculptures. In 1975, he was the only living artist who has exhibited in the Tulleries Garden in Paris. Since the 1960s, di Suvero has been working with metal mostly scraps that he found. Throughout his art-making, he has become fascinated with the construction and the professional handling of these large metals. In an interview he responded that:

"Handling the steel itself at the level of professional steel workers-not just fabricating it and having it blowup-gives one real respect of the machinery."

But besides the machinery element, what di Suvero was really interested was this humanistic and somewhat emotional potential that these metal had as a medium for sculpture. Here again, he mentioned that:

"Any constructivist's work depends on a certain sense of geometry and structure...I’m basically interested in something that Suzanne K. Langer pointed out—that human beings use symbols all the time. The words that we’re using now are symbolic, and mathematics depends on the use of symbols."

The symbolism here to me was like a playful gesture to the gallerist and the public.  While installing such an enormous i-beam piece yet also to be enjoyed on a wooden planked swing supported by heavy ropes, not only did di Suvero succeeded in manipulating the metal into malleable organic and circular forms (as the gallery press release called it something like a knot from which the swing seemed to be suspending and swaying). while back and forth, back and forth, the swaying motion put me in a sate of reverie and calm that felt a bit child-like...aha...