One of the many alluring charms about living in a big city and among a mass urban environment is that he / she gets to construct and thus inhabit in (sometimes, voluntarily but also out of necessity) his or her own world through the process of compiling and composing pieces of mental fragments from personal observation and experience. It is through that process, we establish and develop social as well as psychological relationships among each other and within the space in which we occupy. 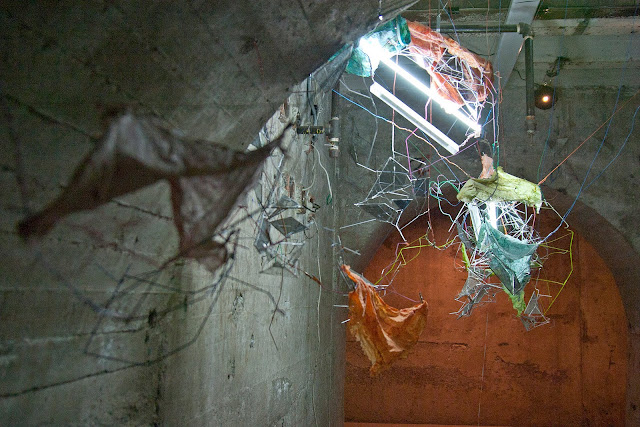 Now take in what I just said, but convert this into something physical.  In other words, let us imagine that the fragments I mentioned are not solely psychological but actually are physical elements that occupy real space.  If you are ready, then please read on...

Currently on view at SculptureCenter through March 19th are these pieces by an amazingly dexterous artist-Takashi Horisaki. These new pieces recently commissioned by SC are called Metabolic-Plan A, Metabolic-Plan B, Metabolic-Plan C, and Metabolic-Plan D. I had the extreme fortune to meet and talk with Takashi during the opening reception on the night of January 15th. 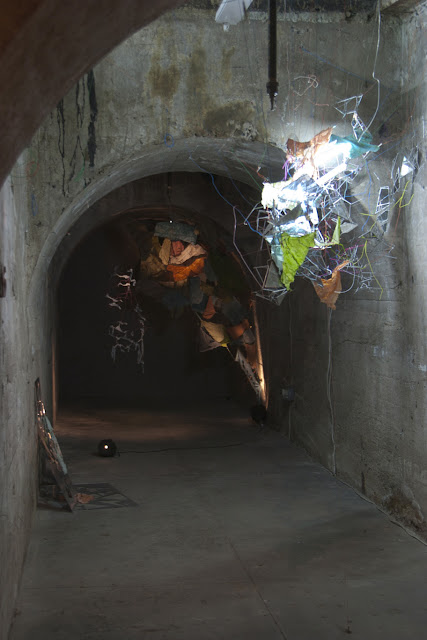 Upon entering the space, one immediately gets taken aback visually by the delicate and yet complex and convoluted construction. Similar to the initial frustration of a foreign visitor in a new metropolis might encounter while trying to make sense of a city map filled with lines and geometric shapes in which contain the promises of providing a sense of geographic orientation. Walking further into the Metabolic plans convey this combination-the excitement of new discoveries together with a slight sense of confused orientation.

According to Takashi, his main interest in making works has always evolved in and around urban social interactions between people and spaces. In the past, he has done performances and made sculptures as vehicles for investigating this interest. Here, the work is not only dexterously constructed but at the same time his process also seems to mimic some kind of an abstract architectural project scheme. Looking more closely, the pieces are gingerly held together by magnets. When a friend jokingly said that she could probably just plug a piece off, then... well, as Takashi replied, "in fact, they look much stronger than they appear. The magnets are all quite strongly connected and not easy to pull apart."

When he told me that he also holds an IT job at night time, this did not surprise me. In a way his sculptures here translate this complex network system that one often would encounter in the nexus a computer network system. This system forms and links our social landscape while at the same time physically connects our world together. Like what Takashi is conveying through these sculptural metabolic systems, what goes on in the underground of a large city such as New York is like an endless maze through which one can never quite tell its beginning from its end. However, one thing remains clear, that we are all connected, reinforced by social interactions, and retained together by an invisible magnetic field. 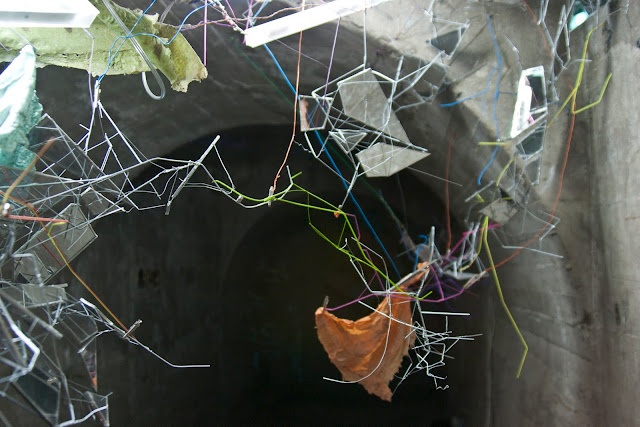 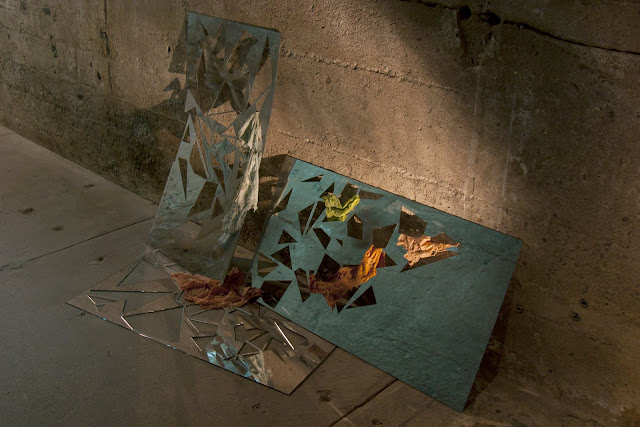 Here in Metabolic-Plan B shows the use of negative space. The cut-out shapes has now been transformed from negative space into positive space.  While this piece is visually presenting the absence of what once filled up its entirety, now it becomes its own entity. This transformation from negative to positive also is similar to the process of transformation in a mass metropolis - which is to say, what had once been destroyed becomes a part of our history and it is upon history that gives birth to new formation and habits. The word metabolic's definition as listed in the Oxford English Dictionary (ninth edition) is the chemical processes in a living thing by which food is used for tissue growth or energy production. As visually represented here, the colorful patches of tissues seem to take on lives of their own. The energy exerted by the magnetic clips bonds the complex together as to form a renewed formation. 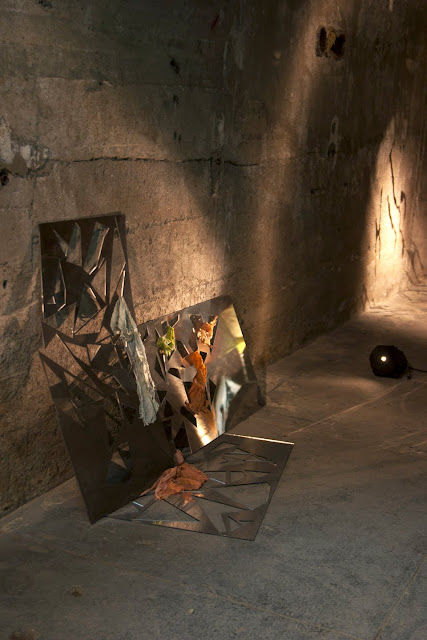 For In Practice: You never look at me from the place from which I see you, (the SculptureCenter's official exhibition title)Takashi made four separate pieces all under the name of Metabolic but each also separately named as Plan A, Plan B, Plan C and Plan D. The last two images are of the latter mentioned pieces. In Metabolic-Plan C, it conveys a melancholic blue mood and its alluring appeal is completed by its own shadow from a light projecting above. Then, the mood uplifts in Metabolic-Plan D as the colorful tissues grow into an abundance of vibrant energy. 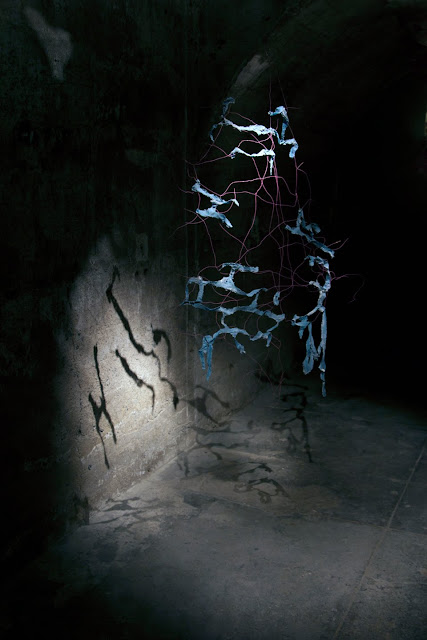 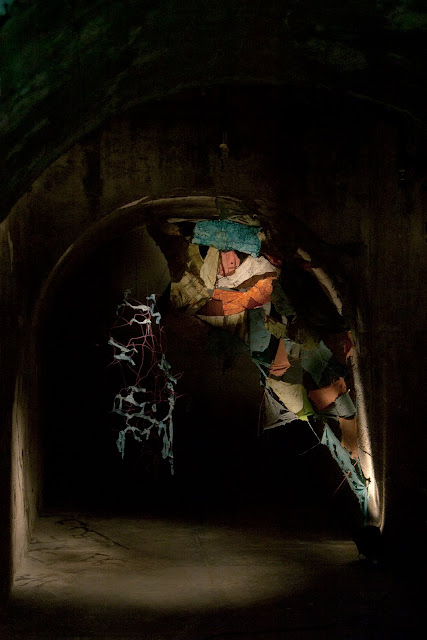 All images courtesy Takashi Horisaki.  If you are interested to find out the exact materials and dimensions of the works, please see this list (in addition, all the images on this page follow this order below)-->