Currently on view until April 1 at DODGE gallery are these amusingly intriguing works of nudes. Paintings of the female body in nude is prevalent through out the history of art. Now that we are in the year of 2012, a different look and interpretation is to be examined and derived from these beautiful and only ever so slightly naughty works by artist Ellen Harvey.

In fact, Ellen Harvey's paintings and re-paintings of nudes do not appear to be naughty in any conventional sense to contemporary viewers. As in they do not necessarily provoke perverse sexual desires or play but explicit acts.  Instead, they question and refer to the intrinsic nature and intention of the original works of these nude images that she found. What intrigued Harvey initially was the abundance of naked images that surfaced when she typed in the word "nude" in internet searches. Almost every search result was inundated with raunchy poses and images of women in pornographic reproductions. In the age of advanced and fast internet technology, the mass generated means has enabled users the quick access to free love and virtual perversion, and not to mention the enticing provocation of voyeurism.

This exhibition, The Nudist Museum Gift Shop is split into two parts, first upon entry is the Nudist Museum Gift Shop. According to the gallerist and the artist, museums shops are now the main and more prominent feature for the visitors, also as a savvy means to market the museum to the general public. The visitors are no longer expected to be lured in by their sheer curiosity in art and culture alone but more inclined to be defined by their spending power as consumers. This phenomenon of museum gift-shops has been architecturally built into modern museums and even in the older ones after recent renovations. In other words, one almost always encounters the shops before actually having the chance to embark on the journey of discovering interesting art that the museums house. The parody of this aforementioned phenomenon is translated through these paintings of found (nude) objects and images from e-bay.

To be honest, I quite like the objects depicted here. There is a certain charm of antiquity and kitsch combined to convey a different kind of sensibility for decorative nudes. Such as the nude women lamps and the boy with chandelier, all of which transpire playfulness while clearly indicate other individual's true affectation toward class and style. 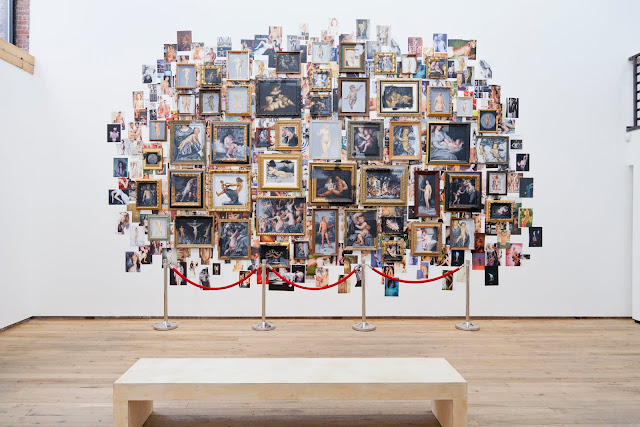 At last...a nudist museum (the second part of the exhibition as mentioned). It is utterly amusing to read such an audacious presentation and the titling of this piece, The Nudist Museum. Virtually all museums of classic paintings should sport this name, the only difference of not categorizing them as such has much to do with maintaining the status quo of high-brow culture versus low-brow mass culture (and consumerism, perhaps). Nonetheless, nudes are nudes and depending how one likes to look at them.

Meanwhile, looking at this piece for the first time, it dawn on me that with the level of sophistication in taste that has developed over recent years in our contemporary cultures, an easy example would be to look at contemporary cuisines. I am talking about the ones in my neighborhood like Park Slope, or Fort Greene and Green Point, where there are many restaurants that serve fancy meals that incorporate somewhat mundane ingredients or food that normally do not get served in a sit-down restaurant. My point is that, if there should be peasant food made for fancy people then perhaps with the development of our visual sense rising to a certain point of sophistication, nudes and naked women should no longer be presented as raunchy or classy. There would be a democratic mix of both the classy women nudes and the crass women nudes to be consumed simultaneously. Somewhat like what you are looking at here, gorgeous paintings of classic beauties plastered along with magazine cut-outs of nudity. Let's all be connoisseurs of nudes and each to our own. Which would you prefer?

Lastly, please allow me to remind you to pay a visit to DODGE gallery and read their own press release.  In it, there is much more information about these pieces and other works in this exhibition.
Email Post