Hysteria, the female kind (Are you looking at me? Part I)

May 19, 2012
Oh boy, some of you may have wondered just what exactly happened to me?  Well, much have happened and too much of a good thing just made me lazy.  However, I have never ceased on spinning out new ideas for writing new posts, unfortunately all my efforts never quite gone past the mental stage… that is until now.

On view currently until June 11th at MoMA is the all comprehensive and impressive retrospective of Cindy Sherman.  Normally, I would like to write more about new artists and works but Cindy is just too big to be kept in the background.

Hysteria is often a description of a physical as well as a psychological attribution of the female kind derives from what used to be and in often case, a male subjective.  It is usually not a compliment but rather an accusation of one's over-sentimentality or sheer mawkishness over matters of no great importance.  I am not here to politicize the use of the word or its applications but rather to show you how in the case of Cindy Sherman, she quite literally turned the camera onto herself with many faces of hysteria, if you will.

This show is very large and I would recommend all attempts to digesting the entire exhibition should be done in two different visits. However if you must do it altogether then you should be prepared to be awed as well as confused as to what is Cindy Sherman actually presenting or who is she investigating and thus trying to uncover through these portraits?

For someone who has an immense affinity for old-fashioned aesthetics, I will start with her black and white film-still series. What I have noticed is that in all of her photographs she is the single human subject in the midst of some grand architectural settings or amongst some carefully laid out architectural symmetry. This could mean a lot of different things, 1. is that she is the single yet isolated element struggling against the grandeur of her surroundings of which are over-powering her. 2. is that she is herself quite lost while trying to find a place to which she belongs or find her way back to the place that has left her behind. 3. she is the center of your attention and hence "look at me!". 4. she is the ultimate female element that counter-balances the masculine symmetry.  The intentions are however not limited to what I am noticing here. 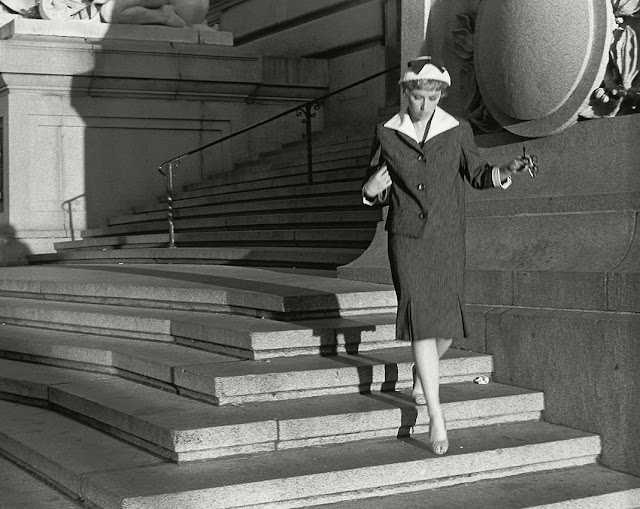 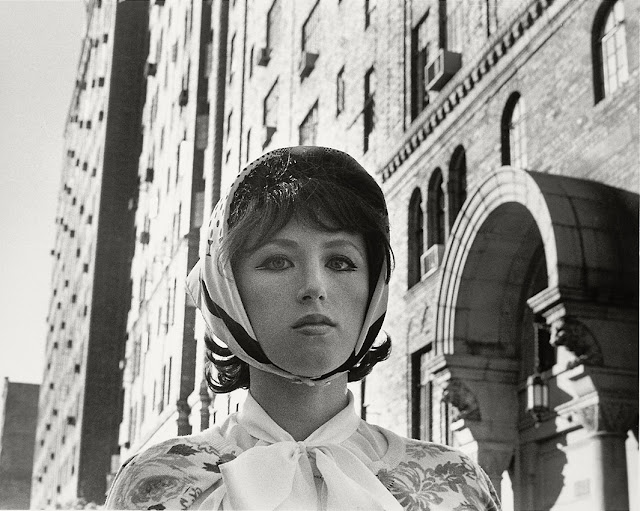 Whilst female hysteria may not seem so obvious in the above images but the drama is certainly undefinable. The strong compositions of each image could only suggest the constrain and rigidity that her characters feel within. There is deliberately the sense of strangeness, loss and desolation. Now let's face the female hysteria… of which are both amusing at the same time quite heart-breaking. 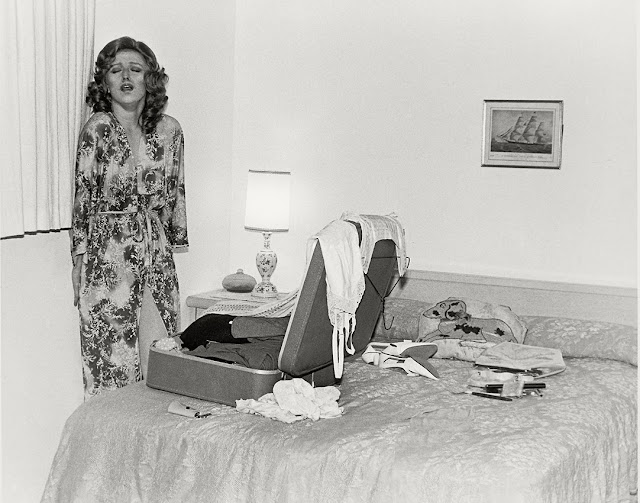 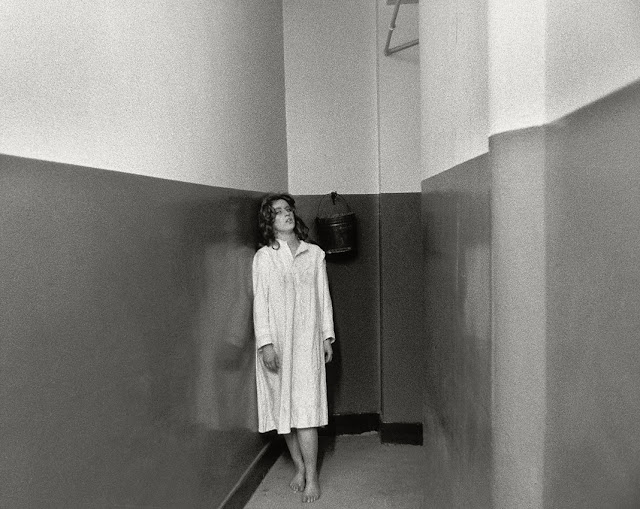 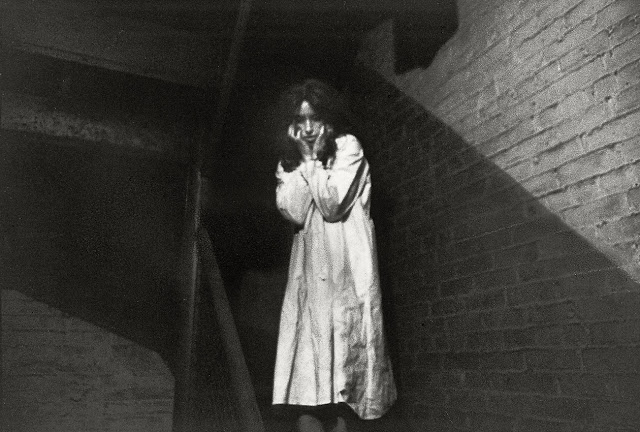 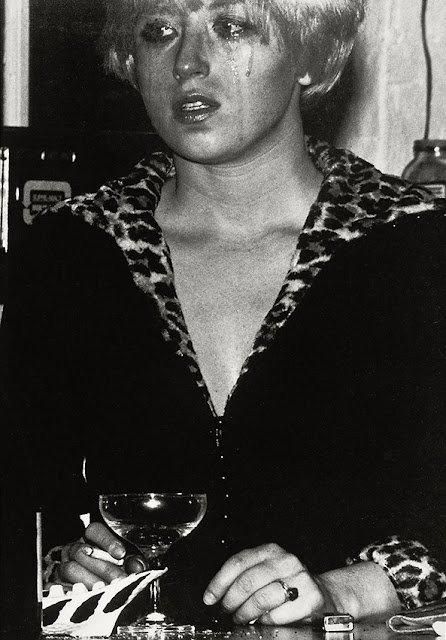 What is most heart-breaking about these women is that they seem lost and frightened of something of such is invisible to us. In other words, as viewers we have very limited clues as to figure out what is really happening in the scene that has caused such pathetic outbreak. Perhaps pathetic isn't the right word, a bit harsh but what I mean is that when such raw emotions are being presented while as the spectator they do seem a bit absurd. Then again, to be at all fair, as human beings and when knowing our shortcomings and when coming to terms with our finite existence, what else should we do but to breakout into a nauseating hysteria?


At times, when one is to look deeply into oneself the pain tends to subside and becomes less severe or if you will, we needn't give into nihilism. And looking into oneself is just what Cindy had in mind next... 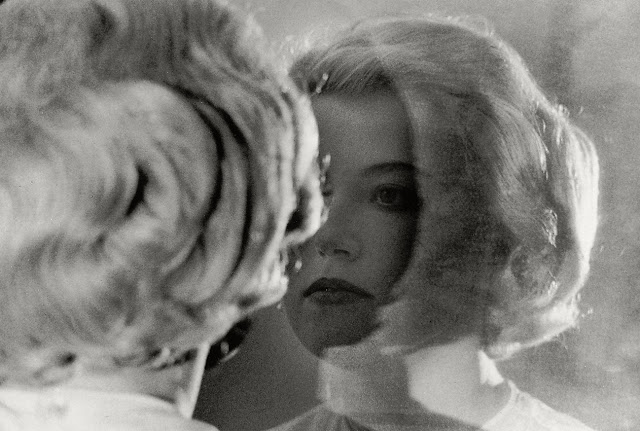 Here in these "mirrored" images one could arrive at the interpretation that Cindy Sherman attempts to show how objectified women are in some contemporary cultural context as the beauty to be gazed upon and admired. In addition, I have a different take on this; even though the images are implying the voyeuristic element however, what also shows here is the self-reflection and the examining of one's self. Consequently, what is interesting about it is that often times the reflections tend to contradict one's own subjective view of the self. In other words, perhaps the mirror is disappointing us or that the mirror is bringing forth something that we were completely unaware before. It is this kind of struggle and tension between the self and the other that makes this exhibition ten times worth seeing than you would think.

p. s. I am working on a second part of this posting, because this is only a very small part of its entirety.