When an artistic practice extends beyond the boundaries of being purely visual, and thus lessens its proprietary authorship by inviting viewers to be active participants rather than passive viewers, the work provides its viewers a relational experience by association.  This kind of artistic practice is likely to feel more relevant to the viewers on a personal level and the work is then distributed and consumed more democratically, which is to say- when the activation of the work involves the audience as much as the artists who conceived the work. This experience could be interpreted as an opportunity for the artists to educate the public as well as an exchange between the viewers and the artists for the opportunity of cultural investigation.  This process could serve to trigger public interest and also further enrich the artistic practice.

Slavs and Tatars is a collective of artists whose practice is self-described as a "faction of polemics and intimacies devoted to an area east of the former Berlin Wall and west of the Great Wall of China known as Eurasia."  Their practice is a combination of academic field research, history, language and culture via means of installations, publications, printed materials, artist talks, lectures and events.

Although the first time I encountered Slavs and Tatars' work was at the The Ungovernables, for which they produced a piece called PrayWay.  But it wasn't until this weekend while helping Savannah and Ingrid at their non-profit organization- Forever & Today's opening reception for the newly commissioned project Never Give Up The Fruit, an installation by Slavs and Tatars that I became again intrigued to understand more about the collective and their practice.

While focusing on the cultural research aspect of Slavs and Tatar's practice, for Never Give Up The Fruit at first look might seem to be just a visual spectacle of beautifully hand-blown glass lanterns in the shapes of delicious melons.  However, the background story came from of a border region of the PRC (People's Republic of China) known to the majority population of China as Xinjiang but also known as East Turkestan or Uyghuristan to the area's Muslim Uyghurs.  The title borrows from the legend of the Fragrant Concubine, the Uyghur Khoja Iparhan, also known as Xian Fe.  While there exists different versions of her legend and recounts of the story, one element that is consistent about Uyghur Khoja Iparhan (or Xian Fe) was that she was not only famous for her beauty but for her irresistible sweet scent that was honeydew-like.  Once kip-napped by the Qianlong Emperor, Uyghur Khoja Iparhan refused to succumb to the Emperor for which later led to her assassination.  Never Give Up The Fruit aims to emphasis the concept of resistance and self-preservation taking the tale of the Fragrant Concubine as a trajectory for cultural investigation.


Upon entry to the exhibition, one is immediately awestruck by the hanging speckled glass lanterns.  For they resemble real melons, each with its own unique variation of pattern and its colors that fade between green and yellow while illuminated by a light bulb from within.  Each melon lantern is suspended by a knotted-rope from the ceiling of the gallery.  The lanterns are made in the shapes that closely resemble the Uyghur Hami melon.  The Hami melon was historically traded along the silk road and sent by the Uyghurs as tribute to the Chinese Emperors of the Qing Dynasty.  For this installation, the original interior of the ceiling had been altered to support the hanging of the lanterns.  The alteration looks at first like a convoluted design of wooden planks intersecting each other. However upon closer inspection the wooden planks are actually in the forms of two Chinese characters 掩饰 of which could be translated into English as dissimulation.

Referencing to Slavs and Tatars' continued interest and investigation of culture and language, the concept of dissimulation in Shi'a Islam is a permissible form of deception or a strategy whereby the truth of one's beliefs or conviction is concealed to protect a believer from imminent harm and injury. This concept also coincides with the legend of Fragrant Concubine for her attempts to elude her imminent fate of succumbing to the Qianlong Emperor or face execution.

Slavs and Tatars started as a collective of reading groups, lecturers and have since expanded their practice beyond printed publications into sculptural installations and reading rooms.  Despite the different venues or different medium, the aim for collective education and the public participatory element have remained prevalent throughout their practice. Currently on view at MoMA's contemporary gallery, Projects 98, Slavs and Tatars presents a new installation called Beyonsense.  It consists of books and printed matters, objects of cultural references and a large but intimate and quiet reading room that also provides the visitors with the collective's publications for their voluntary consumption.

The name of the exhibition- Beyonsense is from a translation of zaum which is a Russian word used to describe linguistic experiments such as with sound and structure of the language by Russian Futurist poets. For this project, Slavs and Tatars draws on their living and traveling experience in the regions between East and West.  As an attempt to reconcile with the the escalating tensions between Eastern and Western identities since the collapse of Soviet Communism.  Before entering the reading room, there are objects displayed in the vitrines that can immediately be recognized as symbols for the Communist ideal of unity and the empowerment of the working class.  With objects such as the brick that of which brings to mind of a manual laborer or the courageous act of manually taking on the task of re-building one's nation according to a unified ideal.  Also the crown of wheat that symbolizes the power of farmers, also used in the national emblem of the PRC (People's Republic of China) to emphasis the significance of the people's power versus a sovereign control.  In the other vitrine, there is a rahlé, a traditional Arabic book stand for holy books that also visually resembles the takht which is a seating area used in tea-salons.  This display particularly reminds me of the PrayWay piece that the collective presented during The Ungovernables.

In order to enter into the reading room, the visitors would need to lift up the carpeted covers.  This carpet motif is also used in the PrayWay piece as a designated location for knowledge and public intellectual discourse.  Symbolically, for Beyonsense by getting behind the carpets the viewers arrive in a space for quiet personal contemplation or to indulge in the pleasures of reading books published by Slavs and Tatar. Yet, the reading room does not feel somber with an overwhelming sense of seriousness.  In fact, the interior space is lit like a nightclub. By that I mean rather than utilizing conventionally white florescent lights the reading room is lit with colored florescent bulbs.  The colored florescent lighting is inspired by a work that Dan Flavin made for a New York mosque. This reading room with its all-around benches invites the visitors to sit down side by side or to read together in silence while listening to the faint sound of incandescent water slowly dripping from the fountain centerpiece.

Similar to Never Give Up The Fruit, Beyonsense also plays with language and text from difference cultures.  The three letters prominently seen on the stand of the fountain are each taken from Hebrew, Cyrillic and Arabic.  To the viewers who do not possess the command of these different languages, the letters do not seem to have a connection.  However all three letters are intrinsically united by the single vocal sound.  This gesture of emphasizing a similarity between what is apparently separate with different cultures also seem to hint the possibility of reconciliation between regions of political conflict and cultural differences.


Finally, since I referenced PrayWay many times in this post, I feel that I must talk a little about the piece and at least show an image of the work.  PrayWay is both a rahlé (a traditional Arabic book stand for holy books) and a takht (or a river-bed seating used in tea-salons).  Visually, it contains the carpet motif of which I mentioned earlier as well as the use of colored florescent bulb that is also seen installed in Beyonsense reading room.  However, my purpose is not just to bring to your attention the visual motifs of this piece in relation to Beyonsense but to also point out the interactive and participatory aspect of which both PrayWay and Beyonsense share.  The reading room at MoMA would not be a reading room if there were no visitors. For the PrayWay piece, since it was presented as a platform for the public to gather around and form discussions among themselves, If the river-bed had no occupants, then it would be seen as just a sculpture.  For the viewers who would not easily recognize or pick up certain cultural visual elements, this piece is likely to be less accessible.  And thus what activates PrayWay is in fact the visitors who are willing to take a seat and utilize it as a public seating.  In this sense, the artistic practice of Slavs and Tatars is as much concerned with social activity as it is concerned with bridging different cultures and attempting to narrow the gap between the perceived differences between Eastern and Western cultures.

Never Give Up The Fruit is currently on view at Forever & Today, Inc. until November 18th.  Beyonsense is on view at MoMA on the second floor of the museum's contemporary art project space until December 10th.
Email Post 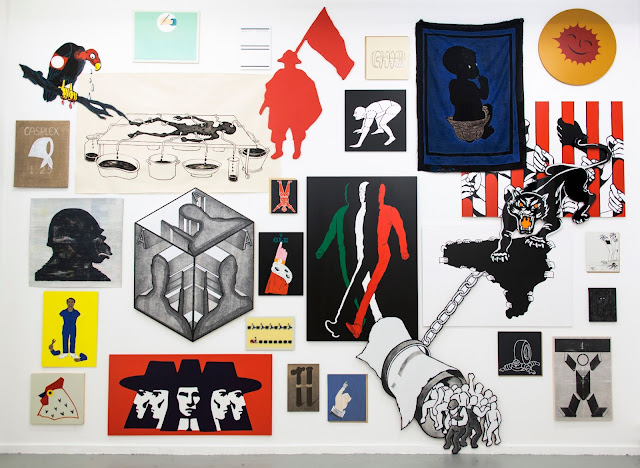