The piece- One and Three Chairs mentioned here is currently on view at MoMA as part of their permanent exhibition.

The questions of “What is length?”, “What is meaning?”, “What is the number one?” etc., produce in us a mental cramp.  We feel that we can’t point to anything in reply to them and yet ought to point to something.
–Ludwig Wittgenstein, The Blue and Brown Books*

Joseph Kosuth defines his art as something that negates the formal and his definition of art is art as an expression of a pure idea.  Furthermore, he believes that art is art and nothing else.  In his Art after Philosophy, he concludes by stating that “In an age when traditional philosophy is unreal because of its assumptions, art’s ability to exist will depend not only on its not performing a service …but rather, it will remain viable by not assuming a philosophical stance. …”**  From this statement, it is clear that Kosuth believes art exists for its own sake.  This manifesto-like pronunciation is like any other proclamation and sounds too ideal that the mission itself is almost impossible to achieve.  In order to work with only ideas without considering the formal, Kosuth focuses his efforts on the meaning and function of language.  This kind of investigation and experiment is in fact a philosophical investigation.  Furthermore, in Wittgenstein’s Preliminary Studies for the “Philosophical Investigations” and in his Philosophical Investigations he poses similar questions about the meaning and function of language.  His investigations on the essential and viable characteristics of language show up in Kosuth’s works.  The above quote extracted from Wittgenstein’s Preliminary Studies for the “Philosophical Investigations” not only questions the meaning of words while more importantly he indicates that in order to define meaning one ought to point to something.  That something requires the basis of a physical and tangible matter by which helps one to understand the function and meaning of the words.  Despite firmly asserting the negation of the formal and that physical material matters little to nothing in his art, Kosuth nonetheless makes conscious choices in the formal elements to retain a specific aesthetics in his art that aids to the conveyance his ideas. 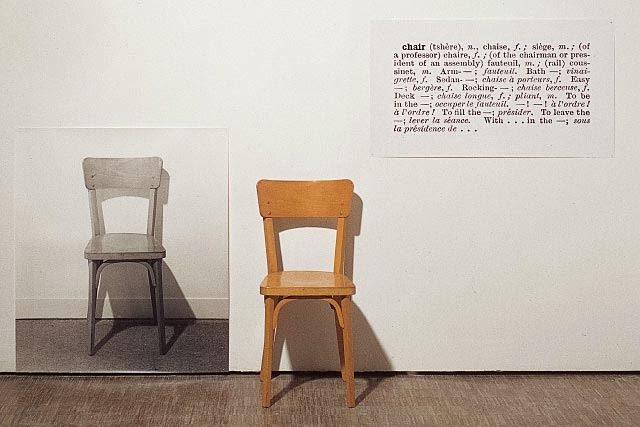 Now returning to his writing “Art after Philosophy” in which Kosuth vehemently denies philosophy and the formal in his conceptual works, meanwhile, there are three works produced at around mid to late 1960s and at the same time his produced the writing can prove that his method of inquiry is like a philosophical proposition and that the ideas in his works are actually reinforced by the formal elements despite his intention to negate the formal.  In his work called One and Three Chairs, 1965 Kosuth presents a wooden chair, a photographic image of the exact same chair reproduced in the same size and scale of the physical chair then beside the two objects he displays a dictionary definition of the word “chair”.  This investigation in tautology confirms that language is intrinsically arbitrary and that without the physical evidence of the thing of which the word signifies, the word is meaningless.  In this case, the meaning of the word “chair” is confirmed by the physical presence of the wooden chair and the photographic documentation of the chair.  Both simultaneously serve as a validating support for the meaning of the word.  If like he mentioned in the writing that the formal does not have the capacity to express the precise idea or meaning, then the presence of the photograph and the chair should not hold primary importance for the understanding of the word “chair”.  Contrarily, the chair and the photograph of the chair reinforce the meaning of the word by visual and physical association. They serve as necessary triggers for the mind to function as to produce the definition.  The concept and the linguistic proposition presented in One and Three Chair in fact closely relate to what Wittenstein’s analysis about the nature of language for which he writes that:

“When we say: “Every word in language signifies something” we have so far said nothing whatever; unless we have explained exactly what distinction we wish to make.  (It might be, of course, that we wanted to distinguish the words of language from words ‘without meaning such as occur in Lewis Carroll’s poems, or words like ‘Lilliburlero” in songs.)***

However in this work, Kosuth is not saying nothing he is making a distinction between the word and the signified to assert the meaning of the word “chair”.  Vicariously, the physical elements of the chair and the photographic documentation serve to reinforce the whole concept of this work.  Therefore, it is not art for its own sake but for the sake of definition and language. 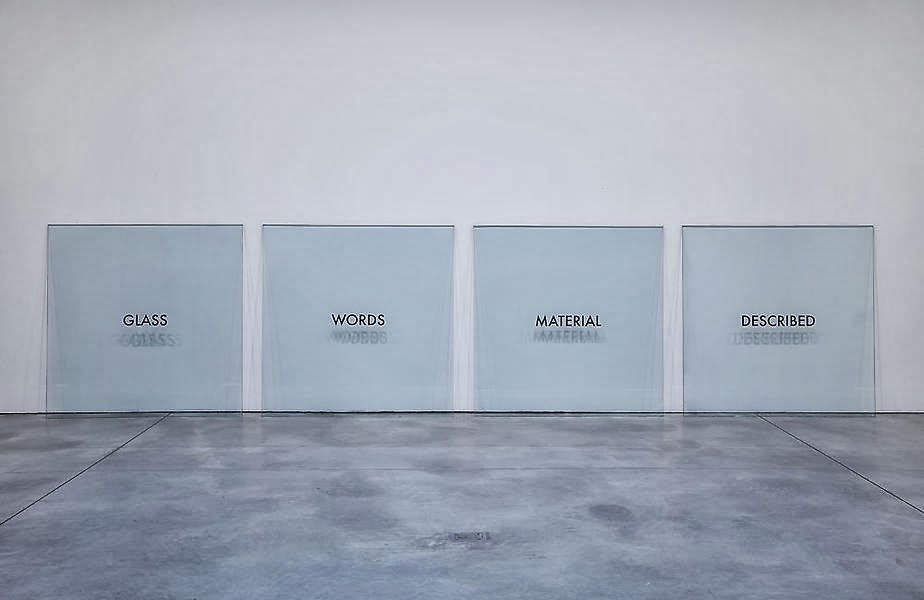 In the section on the function of art, Kosuth quotes Irving M. Copi that “A more functional approach to the study of concepts has tended to replaced the method of introspection. ...” In other words, to understand or study concept is a mental activity and that it involves psychology and perception.  For Glass Words Materials Described, 1965, Kosuth works away from the specifics of a physical object such as a chair but chooses sheets of glass to present individual words.  The four words, “glass”, “words”, “material”, and “described” are painted individually onto the surfaces of four sheets of glass.  The words are positioned squarely in the middle as to emphasize the formal appearances of the words and the arbitrary nature of meaning in language.  In order to understand the concept, a certain kind of introspection is required since no other information is given as to provide meanings of the words.  Yet, this introspection cannot take place without the work’s physical support.  In other words, even though the glass is a transparent material that dose not obstruct or prevent visibility of what lies beyond, nevertheless the material does take a formal stance in the physical environment.  In other words, just because the material is see-through, one cannot deny its actual physical existence.  Moreover, the material of glass is by nature reflective, thereby if anyone stands in front of the piece would see his or her own reflection along with the reflection of the surrounding thus vicariously the physical and the formal is unified within the work.  As Merleau-Ponty states in “Eye and Mind”:

“…the metaphysics we have in mind is not a body of detached ideas (idée séparée) for which inductive justification could be sought in the experiential realm. …These do not prevent the plurality of interpretations but in fact are the deepest reasons for this plurality.”****

Furthermore, the metaphysical or the mind activity that Kosuth aims to provoke through Glass Words Materials Described is supplemented by its formal elements that create an experiential ground for introspection.  If Kosuth believes this work to be an expression of a pure idea then according to Merleau-Ponty it is likely to be mis-interpreted or interpreted in a different way from the original intention.  Since all minds work independently and do not resolve to one and the same “objectivity”.  For example, at the mention of the word “blue”, different people conjure up different shades of blue or different kinds of objects in the color blue and etc. 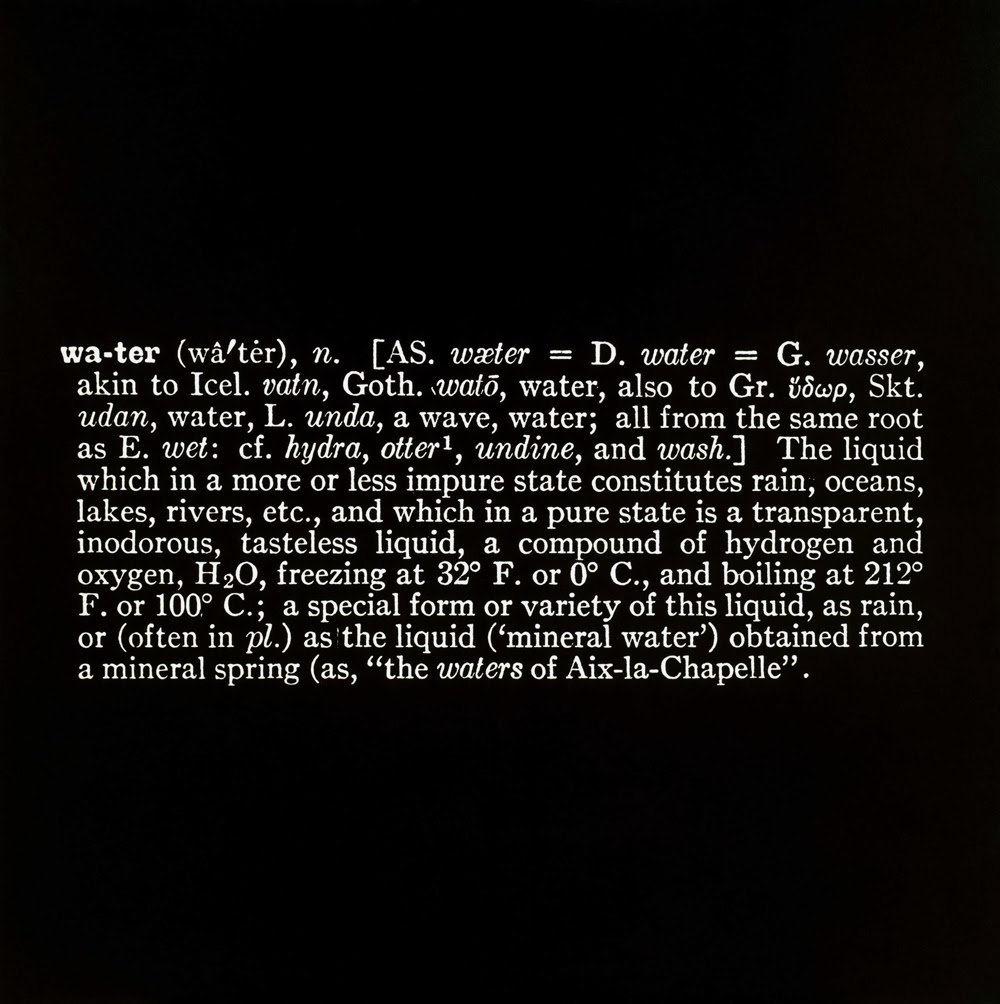 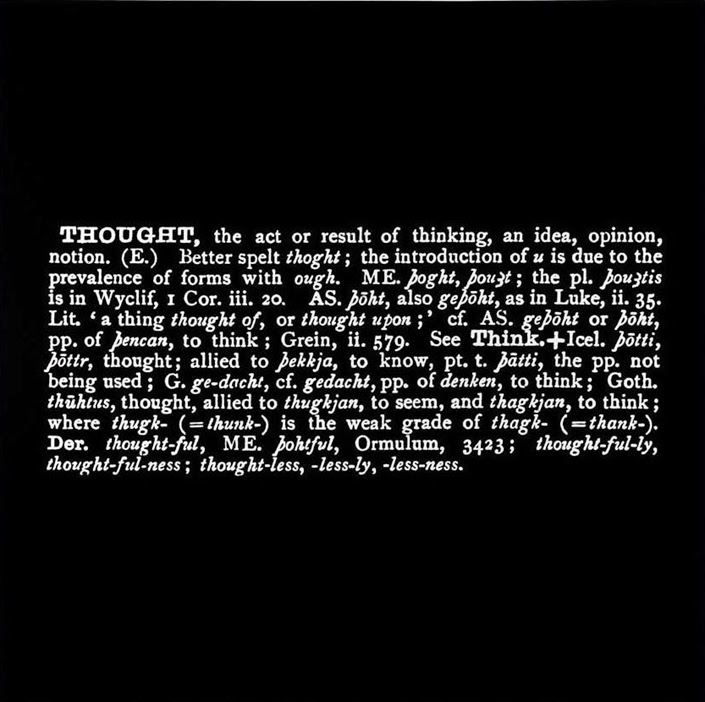 To reduce “plurality”, from 1966-1968 Kosuth creates works consist solely of words and their definitions from a dictionary and obliterates the use of any objects to define meaning.  This is a step up from One and Three Chairs and Glass Words Materials Described, in other words he is getting closer to presenting the idea as an object rather than the other way around.  In the series called “Titled (Art as Idea as Idea)”, 1966-68, Kosuth made photographic enlargements of definitions of words such as “water”, “painting” “meaning”, “thought”, “nothing”, “definition” and etc.  To stay within his intention of presenting idea as object, the latter few words would to serve his aim more sufficiently.  For words such as “meaning”, “thought” and ”definition” imply a type of metal activity that cannot be defined by presentation or representations of the physical.   Nonetheless, “Titled (Art as Idea as Idea)” is still within the realm of an investigation of language.  By examining linguistic meaning and its function once again Kosuth is delving into a branch of philosophy.  Therefore again art is not art for its own sake.  Furthermore, the title of the series alone reminds us that the work is of a metaphysical subject and a philosophical proposition of certainty and truth in language.  This type of proposition in fact coincides with one of the ideas he presents in his writing, in which Kosuth defines art as an analytic proposition- meaning that its validity depends solely on the definitions of the symbols it contains.  If the words are symbols then the definition he provides validates the linguistic value of the words in the context of its usage.  In this instance, his achieves the purpose of presenting an idea as an object.  However, in this series the formal elements strongly implicate how the meanings of the words are to be read and deciphered.  For each of the definition pieces, Kosuth gives specific instructions as to how they should be photographed, type-faced, positioned within the frame.  Further more, the choices he makes in the material, the size, the background color and its final construction are all but formal choices in aid to emphasize the conceptual framework.  If the formal and the physical do not matter, then why give such specific instructions and why should all the “definitions” pertain to one and the same specific aesthetic standard in repetition?

If art exists for its own sake as Kosuth claims then it is equivalent of saying art is nothing and about nothing, just like Wittgenstein’s illustration of the word “Lilliburlero”, an utterly meaningless word that requires no distinction.  On the contrary, Kosuth’s works never say nothing, his works provoke intellectual introspection and make one more aware of the nature and function of language.  Despite his denial of the formal, his works do not produce a “mental cramp”, precisely because he does point to something.  Even though the concept is metaphysical yet its substance is confirmed by the formal.